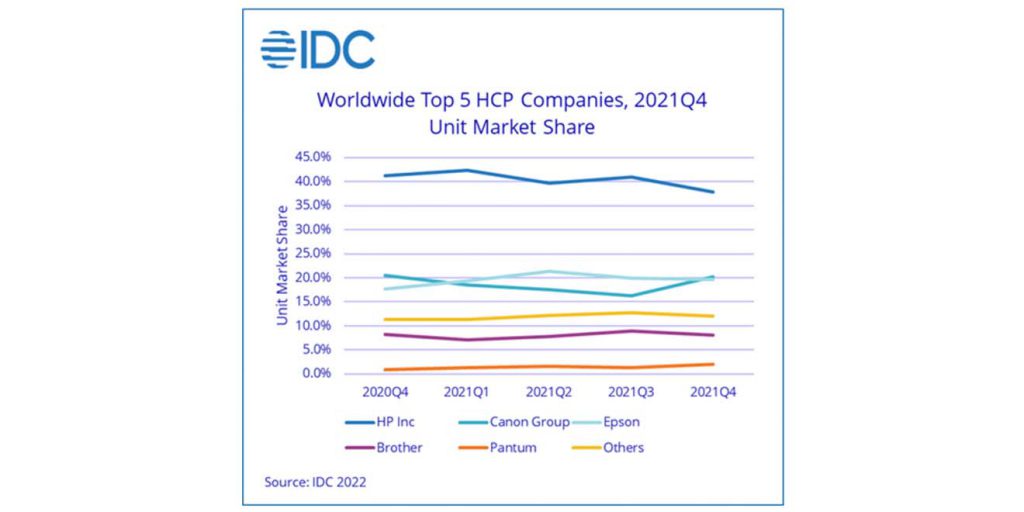 Worldwide hardcopy peripherals shipments were down 17.6% year-over-year in the fourth quarter of 2021, according to IDC.

IDC added that manufacturing constraints and logistical issues continued to dampen growth opportunities for most brands through the end of the year. Most vendors experienced inventory shortfalls in the quarter due to logistical and operational issues, such as production capacity. As a result, nearly all the regional markets saw year-over-year contractions in 4Q21.

Asia/Pacific (excluding Japan and China) (APeJC) recorded the smallest year-over-year decline (-0.9%) due to a strong performance in the laser segment, specifically the A4 Mono segment. Since pandemic lockdown restrictions have been lifted, overall commercial spending has increased, which strengthened demand in the APeJC region.

Pantum recorded the best year-over-year growth among the top five HCP companies, increasing unit shipments 81.3% year over year to nearly 446 thousand. The company’s shipments for both online and offline sales increased significantly during the quarter as it managed to get sufficient supply. This was due to an increased supply of chips from Apexmic, IDC added.