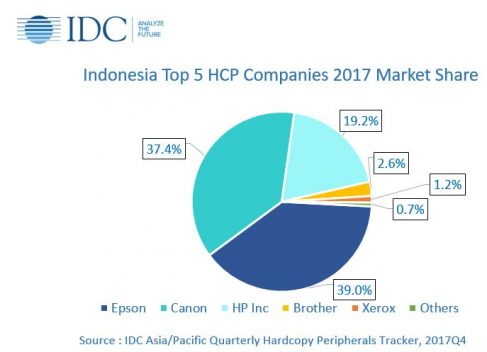 While the HCP market in the country remained flat, Indonesia experienced a spike in ink tank printer shipments.

The Hardcopy Peripherals (HCP) market in Indonesia had a total shipment around 2 million units in 2017, a 0.6 percent year-over-year (YoY) growth, according to IDC Asia/Pacific Quarterly Hardcopy Peripherals Tracker, 2017 Q4. Overall consumer and business sentiments were stable, and the inkjet market witnessed just 0.3 percent YoY growth with shipments reaching 1.8 million units in total. This growth was primarily driven by the ink tank printers, which recorded a high YoY growth of 17.5 percent. Ink tank printers continued to make inroads in the office and commercial segments. Meanwhile, the laser printer market, including copiers, registered a total shipment around 180,000 units with 8.1 percent YoY growth.

“After sluggish movement in 2017 Q2 and 2017 Q3 because of Hari Raya, the retail market picked up in the last quarter of 2017. Purchases in both the consumer and commercial segments increased but were mostly for replacements. High demand in the retail channel are mostly driven by the SMB segment — as per their print requirement, price was the key factor,” says Ngayomi Rino Rivaldi, Market Analyst, Imaging, Printing, and Document Solutions (IPDS), IDC Indonesia.

Inkjet remained the dominant technology in the HCP market in Indonesia, driven by ink tank printers and ink tank contribution going beyond 45 percent. Ink tank printers have been growing constantly since 2014 at a CAGR of 32.7 percent while ink cartridges have been dropping at a CAGR of 17 percent. Ink tank printers are successfully penetrating the market by offering low cost, high printing volume, and low maintenance. Meanwhile for laser, single-function laser printers — especially low-end single-function printers as Indonesia is still a price-sensitive market — still contribute to most of the laser segment’s growth. Laser copier–based MFP market shipment reached around 17,000 units in 2017, dominated by the monochrome laser segment. Growth in the laser copier–based MFP market was driven by greater demand from the government due to the presidential election in 2019. SDM (dot-matrix) printers continued to drop in 2017 as users are gradually migrating to laser/inkjet printers.

Epson topped the HCP market with a share of 39 percent and a YoY growth of 20.4 percent. Epson has a strong brand image for its ink tank printers; its messaging of being a pioneer in the ink tank printer market has supported this growth.

Canon suffered a YoY drop of 14 percent, pushing it to second place in the HCP market for 2017 with 37.4 percent market share. Canon’s performance dropped in both ink tanks (by 43 percent YoY) and ink cartridges (by 12.1 percent YoY) but recorded significant growth in the laser segment by 49.3 percent YoY.

“The HCP market is expected to see only marginal growth in the coming year but most vendors will be targeting key verticals to identify growth areas. With a constant rise of SMBs in Indonesia, an increase in HCP demand is expected, which will neutralize the drop from the enterprise segment due to consolidation and digitalisation,” says Mohit Raizada, Research Manager, Imaging, Printing, and Document Solutions (IPDS), IDC ASEAN.

“In the coming quarter, the market is expected to have a positive sentiment, especially in the retail channel and in projects/tenders. Indonesia’s Central Bank estimates the overall economy to improve in 2018Q1 and business activity is expected to increase in all sectors, especially in finance, real estate, services, and processing industries. The HCP market will slow down in the middle of the year but will pick up again due to the festive season and preparations for the presidential election pat the end of the year,” ends Rivaldi.