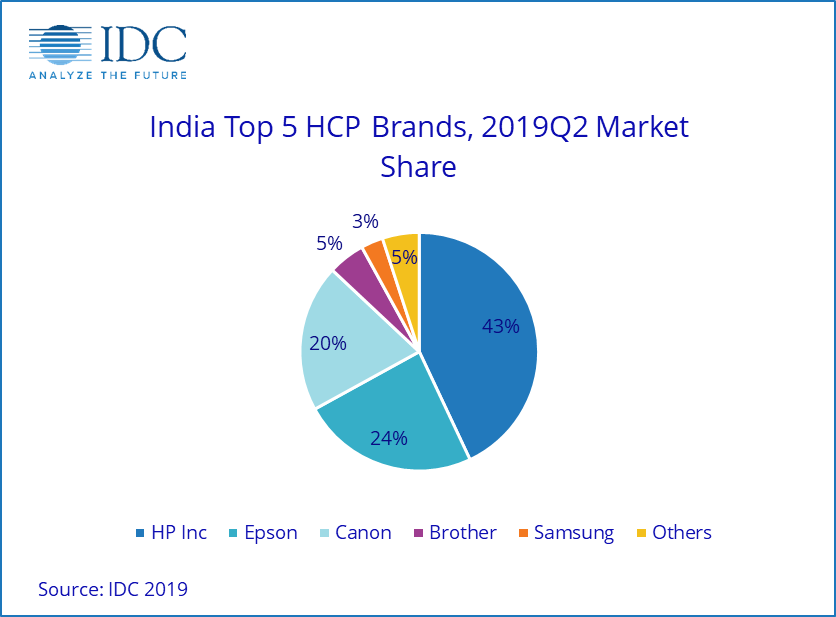 India HCP market posted quarterly shipments of approx. 0.84 million units in 2019Q2, a decline of 0.9 percent on a quarter-on-quarter basis, as per the latest IDC Asia Pacific Quarterly Hardcopy Peripherals Tracker , CY2019Q2. A decline in the shipment of laser printers and serial dot matrix printers brought the overall HCP market down by 4.2 percent year-on-year.

“The decline was primarily due to the slowdown in consumption faced by the HCP vendors owing to challenging economic conditions. SMBs and SOHOs too were restricted in their growth by tighter loan approval processes from banks leading to liquidity issues. Demand from government saw an increase towards the end of the quarter owing to the previous government again winning with absolute majority and executing its previous orders,” said Bani Johri, Market Analyst, IPDS, IDC India.

HP Inc. (excluding Samsung) maintained its leadership in HCP with a market share of 43.0 percent while its shipment grew by 2.1 percent year-on-year. The growth was primarily led by the inkjet segment, which grew by 11.4 percent year-on-year as a result of lucrative channel schemes, thus helping HP retain its 2nd position. On the copier side, HP’s aggressive channel push contributed to growth in shipment’s leading to HP capturing 19.5 percent market share. In the Laser segment (excluding Copiers) HP maintained its leadership position, capturing 59.8 percent of the market share.

Epson remained at 2nd position in the overall HCP market even though it declined by 12.4 percent year-on-year. The decline came with the lower than anticipated demand of New models namely, L3110 and L3150. While Epson continued to hold its leadership position in the inkjet segment, it’s unit market share decreased by 14.7 points to 41.4 percent. Epson had already stocked its channel sufficiently in 2019Q1 and hence the continued low consumer demand in addition to the lukewarm reception of L3110 and L3150 in 2019Q2 affected Epson’s performance.

Canon recorded a year-on-year decline of 3.0 percent while maintaining its 3rd position in the HCP market and capturing 19.6 percent unit market share. In the inkjet segment, Canon grew year-on-year by 14.4 percent as a result of channel stocking even though the market sentiments were subdued. With its wide product portfolio and a strong foothold in the corporate segment, Canon continues to lead the copier market with 29.9 percent unit market share.

“Market conditions are expected to remain challenging in 2019Q3 from a year-on-year perspective as the economic slowdown will impact both consumer and commercial demand. The consumer market is expected to get some boost in the upcoming festive season. Attractive EMI schemes and offers such as instant cashback will likely drive growth in consumer demand,” said Nishant Bansal, Senior Research Manager, IPDS, IDC India.