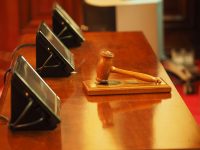 The OEM has had two more legal battles concluded, via a consent judgement and a defaulting.

In the United States District Court for the Eastern District of New York, Canon’s lawsuit against FTrade Inc. was settled after the defendant agreed to a consent judgement (pending the courts approval) and permanent injunction.

According to court papers seen by The Recycler, FTrade wished to conclude the legislation “without contesting or admitting to infringement, validity, or enforceability of any claims of the Asserted Patents”, and therefore agreed to the Consent Judgement, which permanently enjoined and restrained them from “making, using, selling, or offering for sale” any products in violation of the above patents.

Canon also reached a victory in a similar case, against Arlington Industries Inc., which filed a notice of intent to default to the USITC.

Arlington were accused of selling and/or importing toner cartridges infringing the same patents as FTrade, as well as patent numbers 9,841,729 and 9,857,764. As a result of the default notice, however, “Arlington has therefore waived its right to appear, to be served with documents, and to contest the allegations at issue in this investigation.”

These two conclusions represent the latest step in Canon’s ongoing battle against companies which it claims has violated its IP rights, following recent judgements passed against Zeetoner, Bluedog, CLT Computers, and Print After Print.