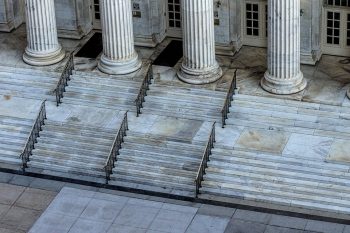 The OEM has won consent judgements and permanent injunctions in two of the 32 patent infringement court cases filed in the United States, brought against Bluedog and CLT Computers, said to have violated all 9 of Canon’s patents.

Court documents viewed by The Recycler reveal that Canon received a consent judgement and permanent injunction against Bluedog Distribution Inc. in the US District Court of the Southern District of Florida, in a case involving the alleged infringements of Canon’s ‘826, ‘021, ‘727, ‘728, ‘729, ‘764, ‘765, ‘960 and ‘846 US patents.

The documents show that Bluedog wished to conclude the litigation “without contesting or admitting to infringement, validity, or enforceability of any claims of the Asserted Patents”.

As a result, both Bluedog and Canon agreed to a consent judgement in which Bluedog, while not admitting any wrongdoing, did not contest Canon’s right to claim ownership of the patents involved in the case, and agreed to a permanent injunction forbidding the company from “making, using, selling, or offering for sale” any products said to infringe the patents.

This conclusion was reached on 18 April 2018 and was signed by United States District Court Judge Federico A. Moreno.

In the case against CLT Computers, which arose due to alleged infringement of the same patents mentioned in the Bluedog case, a similar resolution was reached. While also not admitting any purposeful wrongdoing, CLT did not contest Canon’s claims to the ownership and validity of the patents, and agreed to the permanent injunction forbidding the company from either directly or indirectly infringing the patent, through the manufacture, use, or distribution of any products that fall “within the scope” of any of the claims of the asserted patents.

As a result, the action was dismissed, “with prejudice” on 23 April 2018, signed by Judge Cormac J. Carey.

These court cases are just two of many embarked upon by Canon in recent months, among them a slew of 32 separate lawsuits filed in the US, which included the cases against Bluedog and CLT Computers.  Only last week, another of the 32 cases was concluded in favour of the OEM, with Print After Print also stipulating to a consent judgement and permanent injunction.