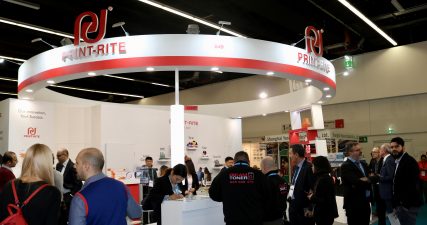 Ahead of Paperworld 2019, Print-Rite says it has been reflecting on last year’s event and the “bullying and legally invalid patent infringement claims” the company says it faced as a result of “misleading tactics from OEMs.”

According to Print-Rite, during Paperworld 2018, German customs officials visited the company’s booth and informed Print-Rite that an OEM has “raised a Design Patent infringement claim regarding a poster” being displayed at the booth.

Print-Rite continued, “We were forced to sign a letter acknowledging that we violated the OEM’s design patent, or our personnel in the booth will have to face charges and arrest.”

The company added that, “to ensure that our employees and customers weren’t troubled at the booth, our representative signed the acknowledgment and also paid a security deposit as per their demand. This made the customs official leave our booth. Before leaving they even cut out that part of the poster with the picture of our product which led to the false accusation of design patent infringement.”

Following these proceedings, Print-Rite says it filed a statement with German Customs citing non-violation and patent invalidity, stating that “under no circumstances” did its poster violate the OEM’s patent.

The matter was subsequently transferred to the Department of Public Prosecution in Frankfurt. Months later, Print-Rite said, it received notification from German Customs that the OEM would have to file a civil lawsuit in Germany if it wanted to take the matter further; thus far, no such civil action has been taken by the OEM.

According to Print-Rite, this “clearly shows that their intention was just to intimidate us and bring disrepute to our company and brand.”

Now, the company says, “We would like to appeal to all non-infringing aftermarket companies to stand up against such bullying tactics by any company who abuses this system, and give them fewer reasons to pursue legally invalid tactics. In our opinion exhibitors should sign a formal letter outlining the issue and demand that Paperworld management stop the swarming of booth without justification, and give exhibitors the opportunity to refute the claims before any actions are initiated. Paperworld Management should also take initiative to openly report through their media outlets and other trade news channels the instances where the aftermarket companies has successfully exposed these invalid tactics, just as in our case.”

Print-Rite concludes, “This year at Paperworld, our colleague Mr. Joachim Kretschmer will be talking at The Recycler Live on the topic of IP and how it is a key aspect in the hardcopy business. Mr. Kretschmer is the Compliance and Sales Support Manager at PRP Solutions, Germany. He has 29 years of experience in inkjet, electrophotographic and other printing technologies. Before joining Print-Rite he was a Director of Research & Development of Pelikan Hardcopy.”