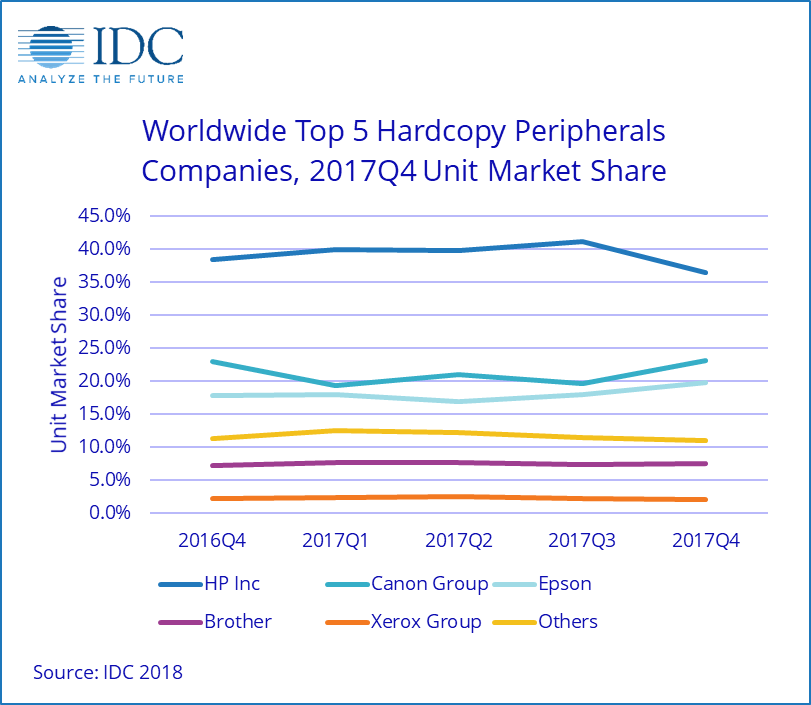 According to the latest data from IDC, the worldwide hardcopy peripherals market grew 1.2 percent year-over-year in the fourth quarter of 2017.

Three out of the top five companies saw year-over-year shipment growth in 4Q17, with Epson leading the way at 12.2 percent, followed by Brother at 5.2 percent and Canon Group’s 1.4 percent. Top-ranked HP Inc. recorded a year-over-year decline of 3.8 percent in 4Q17.

The data shows that for the full year 2017, HP Inc.’s shipments of more than 39 million units remained unchanged from 2016 while Epson, Brother, and Canon Group posted positive year-over-year growth of 4.6 percent, 3.6 percent, and 1.3 percent, respectively.

IDC show notable highlights from this quarter include:

Contributing to inkjet’s growth of 3.3 percent year-over-year in 4Q17 were increases from Latin America, Central & Eastern Europe, Middle East & Africa, and Asia/Pacific (excluding Japan) (APeJ). Some of the factors behind these gains included a rise in shipments of ink tank devices outside of the APeJ region, increased salary levels that had helped to boost consumption along with the rapid growth of e-tail channels in China, and high demand from businesses after the implementation of GST in India.

Asia/Pacific (excluding Japan) outperformed all other regions in the laser segment, posting 6.1 percent year-over-year growth to 3.9 million units shipped in 4Q17. China continued to be the main source of growth in the region due to strong expansion of the small and medium-size business segment and strong demand during the year-end online shopping festivals. India was also a major contribution to growth in the region with a 19.0 percent year-over-year increase in shipments.

Epson showed positive year-over-year growth in all IDC’s regional markets. Epson launched more new models this quarter to help support its push of ink-tank devices. Although the L360 is still Epson’s top model, adoption of the L380 also showed strong momentum as the shipment volume almost surpassed the L360 model this quarter. Meanwhile, the L1300 had been the best performing model of Epson’s new range of devices.