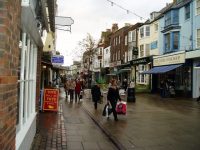 The 2nd Warwick Sea Scouts group is putting its efforts into various recycling schemes throughout the Midlands town, in a bid to help the environment and raise vital funds.

The group will receive points for every kilogram of waste collected, with the points converted into money which will then support fundraising efforts for a new headquarters, as part of the Sea Scouts’ ‘Building A Future’ initiative.

“The scheme came about as the group was looking for new ways to raise money for their new hut from our own members,” explained 2nd Warwick Sea Scouts’ Janette Eslick, who added that “lots of members were also very keen to try and find ways that the group could also be more environmentally aware.”

“Hazel [Underwood], one of our fundraisers, is very passionate about recycling and researched what we could realistically offer and initially set up recycling points in our hut,” continued Eslick. “Hazel felt that it was a great way for us to build links with the community and also promote the scheme to more local people if we could arrange a public collection point, so started to contact local businesses and was delighted when managers at Mellors and Claridges both agreed to come on board.”

“We’re delighted that Mellors and Claridges are keen to support our group and to do their bit for the environment,” declared Underwood herself. “We think it’s really important to engage our young members in recycling schemes and seeing local businesses and the community also supporting them makes a big difference.”