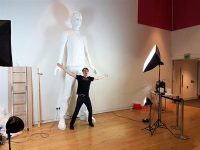 Bruton has been using 3D printing for a range of projects and sculptures on his YouTube channel for a while, as well as bringing it into his robotics projects, reports 3ders.org. Now, his 3.62 metre (11.8 feet) statue of himself has found its way into the record books.

The sculpture, which was completed in July 2017, was installed at the Winchester Discovery Centre in Hampshire, England, as a feature of the centre’s Creative Genius Exhibition. It was awarded the official title after a Guinness adjudicator confirmed it was both free-standing and self-supporting, as well as being made from exclusively 3D printed parts.

Bruton, 41, said after the recognition: ”It took two months and a lot of printing time to achieve the record so I’m pleased to have finally got my hands on it!”

The sculpture was created by using a detailed scan of Bruton’s body, taken using an iPad. He chose to model it on himself to sidestep any potential copyright qualms, and said he had decided to make a human statue as it was a “relatively uncrowded field.” The 3D digital mesh used to begin the printing was created with the assistance of designers and engineers from Portsmouth University.

The printing process itself involved two separate machines, working simultaneously, last approximately 500 hours across two months, and utilised around 50 kilograms of filament. The finished sculpture takes the record from a 3.06 metre (10 feet) statue printed by FabLab Kielce, of Poland, in 2016.

Bruton added: “I really enjoyed working towards the Guinness World Records title for this – I’m thinking about doing another one in the future!”