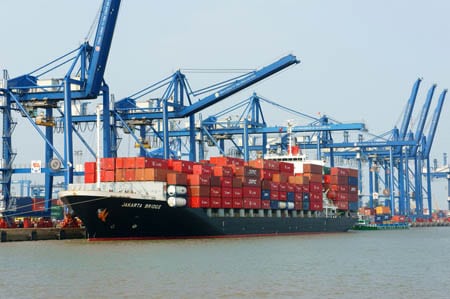 Newly-introduced restrictions on imports of plastics into Vietnam have caused concerns for plastics recyclers, as the country attempts to tackle the post-China ban congestion.

Letsrecycle reports that problems in the South East Asian nation have sprung up as “its main ports are awash with material for recycling,” and that this, combined with delays to ships attempting to find slots to berth, has led to the restrictions being imposed.

One recycler speculated that the restrictions, which were confirmed in a letter from Tan Cang-Cai Mep International Terminal, particularly apply to be “lower quality film”, and mixed plastics from the United Kingdom, Europe, and elsewhere in the world, such as Australia.

The restrictions, and their cause – unmanageable build-up of imports – are a result of China’s ban on importing waste, that came into effect earlier this year. The sharp increase in use has led to Vietnamese authorities imposing congestion charges due to the increasing shipping jams in its ports.

This congestion, or “temporal overcapacity”, has affected a number of the nation’s ports. More than 8,000 TEUs (twenty-foot equivalent units) has accumulated at Tan Cang-Cat Lai Terminal, impacting its operations and its business activities, as well as having a knock-on effect on shipping lines.

Large volumes of waste are also piling up at the Cai Mep International Terminal, which cannot be transferred to Cat Lai due to its own overcapacity. This situation prompted the port operators, Saigon Newport Corporation, to publish a letter confirmed that its ports will follow Cat Lai in halting the import of all plastic waste between the 25th of June and the 15th of October, as it attempts to manage the deluge.

The crisis follows news that Malaysian ports are also set to impose restrictions, and the news – reported by The Recycler last week – that Thailand is becoming to go-to dumping ground for e-waste since the China ban, as South East Asia prepares to deal with the fallout from the superpower shutting the door.

Earlier in May, the Bureau of International Recycling’s plastics committee issued a warning for international trade to be wary of sudden import restrictions being introduced by emerging export markets, cautioning that such an eventuality would “again push international trade into a tailspin.”