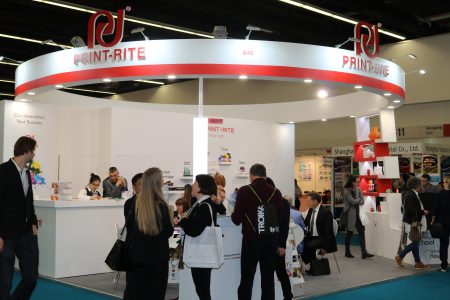 Following on from January’s trade show, two companies have published their thoughts and reactions.

TN Core and Print-Rite have reflected on last month’s Paperworld trade show in Frankfurt, with both companies expressing pleasure at how the event went.

South Korea-based chip manufacturer TN Core, which called Paperworld “the world’s best office supply trade fair”, announced that it had “greeted more visitors than ever before”, and “drew attention and [a] positive response” from them.

The company further specified that its new, upgraded i-PROG resetter received a lot of attention, and added: “There was a lot of interest and inquiry concerning the Lexmark MX/MS reset, the Xerox data change, and the new Kyocera reset. i-PROG users who were satisfied with their products even introduced and promoted i-PROG personally to their acquaintances.”

Print-Rite, meanwhile, declared the show to have been “a resounding triumph”, praising the “great buzz about this year’s event” and the “very positive meetings with potential new customers.”

Its booth was “busy throughout the show,” the company continued, with visitors keen to discuss both its toner cartridge range, and its Colido 3D printers, which were also on display.

You can read an extensive review of the whole show in the forthcoming Issue 304 of The Recycler, or enjoy our online coverage here, here, here, and here.