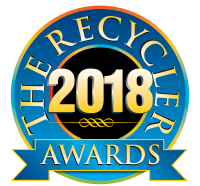 With time still left to vote for your favourites in The Recycler Awards 2018, we have already received record levels of votes cast, exceeding last year’s total.

Altogether, over 23,000 votes have now been cast, more than the total number of votes we received the same time last year, and there is still more than two weeks to go until voting for the 2018 edition of the Awards closes at midnight on 27 January 2018.

Don’t miss out on your chance to have your say! Click here to cast your vote.