Charting changes and chewing over challenges: Day Three at Paperworld 2018

On the third day of this year’s trade show, many exhibitors were looking ahead to what the year may bring.

Yesterday was the third day of the annual Paperworld trade show at Messe Frankfurt, including the Remanexpo product group, and amongst the usual business and networking, many of those present took the opportunity to reflect on what the coming year may have in store.

Speaking to The Recycler, Steven Huang, the Executive Vice President of GPI, foresaw a “boom in turnover” for the Taiwanese company in 2018; Huang attributed this to a delayed chip launch in 2017, which meant a period of mass production this January. Christian Schulte, the Managing Director of Team Hell & Schulte, was similarly positive, as his company not only looked forward, but also looked back on a year in which “they were still growing, in a shrinking market.”

“We are optimistic to grow, again, our business this year,” declared Schulte, adding his ambition was also to “go ahead with our strategy to supply quality products, with an excellent service to the dealer.” There were also enthusiastic assessments from Effective Consumable Solutions’ Director Felicity Rabbitte, who stated that her company were “becoming a much stronger player in Europe,” whilst CEO of Zhono, Jack Wong, spoke of his hope that in 2018, “more and more remanufacturers can support independent companies like Zhono.”

Yet there were also reasons to be cautious about the future of the industry, with the threat on most exhibitors’ minds coming from a familiar source: The OEMs.

“What the OEMs do has a big impact on what everyone else does,” asserted Keypoint Intelligence’s Andrew Carroll, during an insightful seminar on that very subject. “Overall, the office technology market has plateaued, globally.” He added that HP, to name one example, had seen its total printing revenue drop by 21 percent between 2014 and 2016, and that the result of falling sales was that “a lot of people were trying to get a bigger piece of the same pie.” 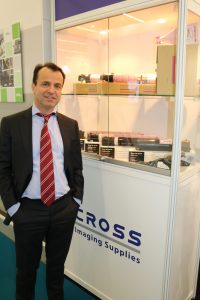 Christian Schulte backed up Carroll’s view, with a warning of what it meant for companies like his: “Every year, the pressure of the OEM to the aftermarket is getting stronger,” he explained. “As the market is shrinking, the OEMs are even more under pressure to protect their business. […] They can’t grow anymore. They fight hard, and put a lot of pressure to our customer base, to keep their hands on the consumables.” Jack Wong was also wary, particularly citing his concerns with the OEMs’ development of firmware, and the effect that would have on Zhono – similar worries to those expressed by Apex’s Amber Shi on the first day of the show.

ECS’ Felicity Rabbitte built upon Carroll’s metaphor, meanwhile, telling The Recycler that she believes the biggest challenge to the remanufacturing industry will arise from the fact that “there will not be enough virgin empties for everybody who wants to remanufacture. I think everybody’s fighting for the same empties just now.” She added that the problem was more prevalent in some corners of the globe than others – “obviously China haven’t got enough, because they’re just trying to take all of Europe’s.”

A separate worry was expressed by Steven Huang, and by Cross Imaging Supplies’ CEO Simon Weiss, when discussing 2018’s likely hurdles. “The currency still is a challenge,” said Huang, “the Taiwan dollar to US dollar has become very weak. We are exporting our products around the world, so the currency exchange is a big challenge.”

Speaking from a European perspective, Weiss agreed. “We have challenges in terms of the currency situation, the euro, the dollar – which now is to our favour, but who knows how long it will stay like this?”

“It is a time of change,” he continued, “and everyone has to rethink his position and place, and how he wants to reposition himself for the future.” Such repositioning was also touched upon by Andrew Carroll, who stressed the importance of differentiation, and asked – “do you focus on doing something very well, or do you diversify?”

Carroll’s was not the only thought-provoking seminar of the day, however, with Mark Dawson from the Internet of Printing discussing how a combination of ‘Amazonification’ and an increasingly millennial global workforce could spell “a perfect storm for traditional resellers.” Antonio Sanchez then spoke on Managed Print Services, and unsustainable long-term inefficiency, before Actionable Intelligence’s Charlie Brewer finished the day’s schedule by casting his eye over the imaging market and what the future might hold for it.

The show’s third day also brought satisfying news for one exhibitor, which had been the subject of an investigation by the German Federal Customs Service (Zoll) on Saturday afternoon; according to an informed source, on Monday morning Zoll officers revisited the exhibitor’s booth, to return the previously confiscated products and apologise to them. 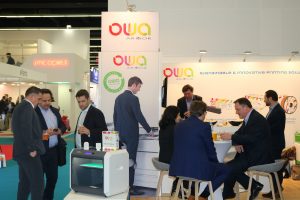 Armor’s booth party for friends and guests on Monday evening.

Despite the various concerns expressed for what is to come in 2018, as Monday evening rolled around, Hall 6.0 was alive with the sound of merriment and music, with several exhibitors throwing booth parties for their colleagues and customers. One such party was hosted by SAS Armor Soc, who managed to impress guests at the same time, by revealing some of its new technology over a selection of well-earned drinks, ensuring a vibrant and positive conclusion to the day.

Today’s final leg of Paperworld will see a joint presentation by Lightwords Director Peter Mayhew and Connett & Unland’s David Connett, who will then deliver a seminar on premium pricing, before The Recycler’s Managing Editor Stefanie Unland will bring the curtain down with a look back over an action-packed four days. To stay up to date with all the latest news from Frankfurt, visit therecycler.com, and look out for our review of Paperworld 2018 in our forthcoming Issue 304.