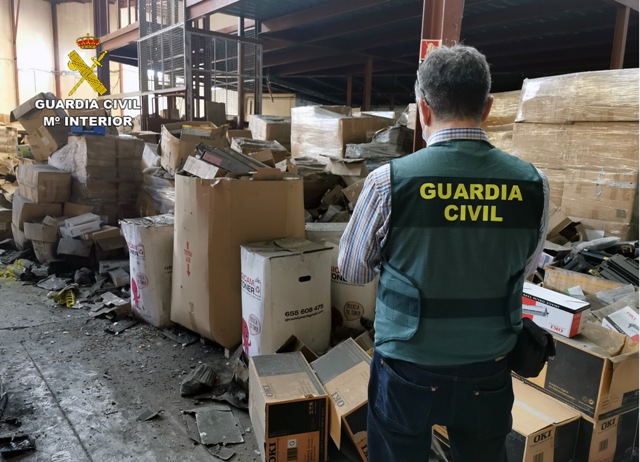 Three people are being investigated for this crime against the environment, for seizure of property and for belonging to a criminal organisation.

Operation “Murton” was launched by the Civil Guard in the Murcia region in South East Spain. Following a raid 5,000 tons of used printer toners in a clandestine warehouse in Baños y Mendigo (Murcia). The Civil Guard is now investigating three people involved in the management of this waste from different points of the national geography such as Madrid, Barcelona, ??Toledo, Castellón, Cádiz and Cantabria, among others, as well as imported from Italy.

According to the Civil Guard “These hazardous wastes were stacked without any type of control in a seized industrial warehouse that lacks extinguishing and surveillance means.”

The toners were stacked without any type of control or the corresponding labelling in an industrial warehouse in Baños y Mendigo (Murcia), which was also seized. The property also had no means of extinction or surveillance.

The Civil Guard commented: “Considered as hazardous waste from electrical and electronic equipment (WEEE), the toners were stacked in cardboard boxes, in large bags and scattered on the floor, even spilling large amounts of ink on the floor.

There are different types of toner, mostly made of iron and carbon, and other elements such as chromium, copper, inorganic cyanides, acrylics, developer and thermoplastic particles.

Small particles are dangerous because they can be easily breathed into the lungs and even into the bloodstream.

The cartridges contain different metals, plastic and the toner itself, which can spread through the air ten times faster than ordinary dust and cause allergies in people, contaminating the soil and water.

The ‘Murton’ operation has resulted in the investigation of three people in Murcia, who have been instructed to proceed as alleged perpetrators of crimes against natural resources and the environment, usurpation of property and membership of a criminal organization.”

The waste producer is always responsible for their waste. Even if you have paid someone to dispose of your waste correctly, you are responsible for its safe and correct disposal. If any of the waste can be traced back to a company, that company would be liable for costs of the safe disposal on the waste.