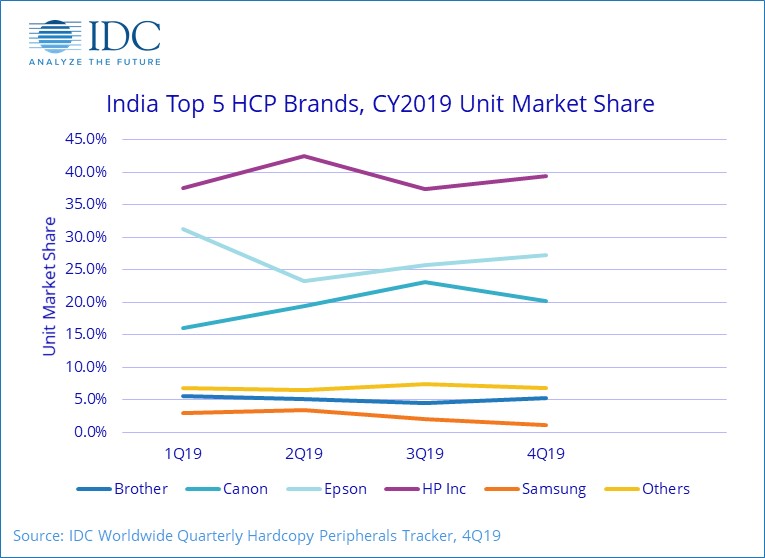 The Indian HCP market has recorded a decline of 4.7% year-over-year in the calendar year 2019 (CY2019) even as ink tank printers overtake laser printers to lead the Market in the second half of 2019, IDC India reports.

The Indian HCP market shipped 3.5 million units in CY2019 and registered a year-over-year (YoY) decline of 4.7% due to weak demand in the consumer segment. In fourth quarter of 2019 (4Q19) the market shipped 0.79 million units, a YoY decline of 7.3%, as per the latest IDC Worldwide Quarterly Hardcopy Peripherals Tracker, 4Q19. 4Q19 witnessed low demand, which was a result of overstocking of the channel in 3Q19 and prevailing consumer sentiment.

The annual decline was primarily from laser printers (excluding copiers) declining by 11.8%, as the market continued to be impacted by weak demand as well as migration to ink tank printers. The laser copier market grew by 6.9% with strong corporate demand and continuing decline in the segment of refurbished copier market. The inkjet market remained stable with a decline of 0.1%. The year ended with the inkjet market commanding more than half of the market.

“Two segments weathered the challenging market conditions in 2019. Ink tank printers grew by 7.0% and now command 73.2% of the inkjet market. The Ink tank segment overtook the overall laser printer segment for the first time in 2H19. The laser copier segment also noted a growth of 6.9%. In 2018, Government’s strict regulation on the refurbished Copier (RC) market through tight monitoring and increased seizing of illegal units at major ports gave a boost to the original copier segment, which continued in 2019 as well. However, by 2H19 the market resumed its normal pace of growth as the effect of RC market stabilised,” said Bani Johri, Market Analyst, IPDS, IDC India.

In the fourth quarter, inkjet printer shipments declined by 2.9% YoY with a contribution of 52.3% to the overall Indian HCP market. The decline in inkjet printer shipments was led by ink cartridge printers, which recorded a steep YoY decline of 23.8%. The overall laser printer market declined YoY with the laser copier declining by 12.4%, its sharpest decline since 4Q16, as the market normalizes post the spurt in 2018 following the closure of the refurbished copier market.

4Q19 witnessed the sharpest quarter-over-quarter (QoQ) decline of 24.4% a result of a combination of factors. Firstly, in 3Q19 multiple vendors overstocked the channel prior to the festive season online sales in 4Q19. Also, low sell out due to muted consumer demand affected the entire channel’s credit system causing distributors to hold back on purchasing fresh stock till the previous inventory was cleared, IDC explained.

HP Inc. (excluding Samsung) maintained its leadership in CY2019 HCP market with a market share of 39.1%, while posting a YoY decline of 7.4%. HP’s Ink tank shipment grew by 14% YoY as a result of strong channel schemes and end-user promotions. Its laser A4 segment witnessed a decline of 9.7% YoY, its highest decline since CY2009. HP’s share in the copier segment grew by 29.4% YoY owing to strong channel push. 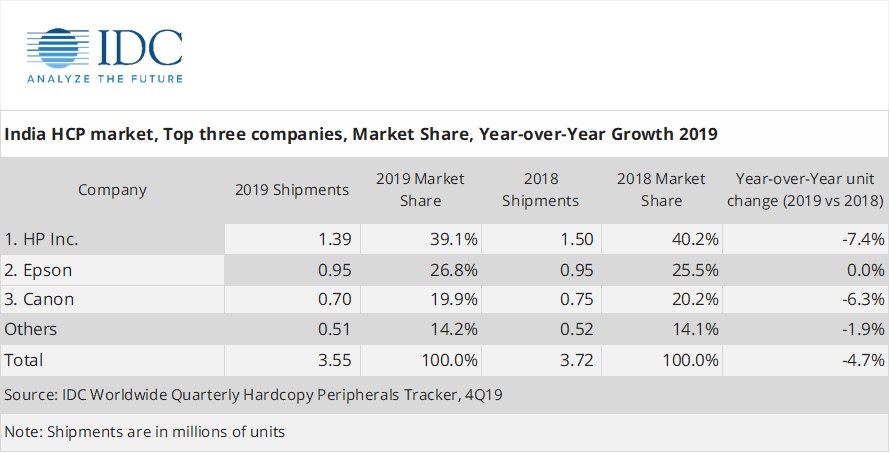 Epson maintained its 2nd position in the overall CY2019 HCP market with 26.8% market share. It also continued to hold its leadership in the inkjet segment with a market share of 45.7% and YoY growth of 1.4%. Epson’s stable numbers despite muted market sentiments can be primarily attributed to Epson’s strong brand recall, channel depth and multiple channel schemes in the first half of the year.

“IDC expects the overall HCP market to remain stable in 1Q20 led largely by Ink tank printers as vendors continue pushing them aggressively, while laser printers will continue to decline. We also expect demand from the SMB segment to improve in 2020 as the credit situation improves. Government demand is likely to be robust as several departments rush to spend their allocated budget in 1Q20 leading to strong demand for laser copiers,” said Nishant Bansal, Research Manager, IPDS, IDC India.