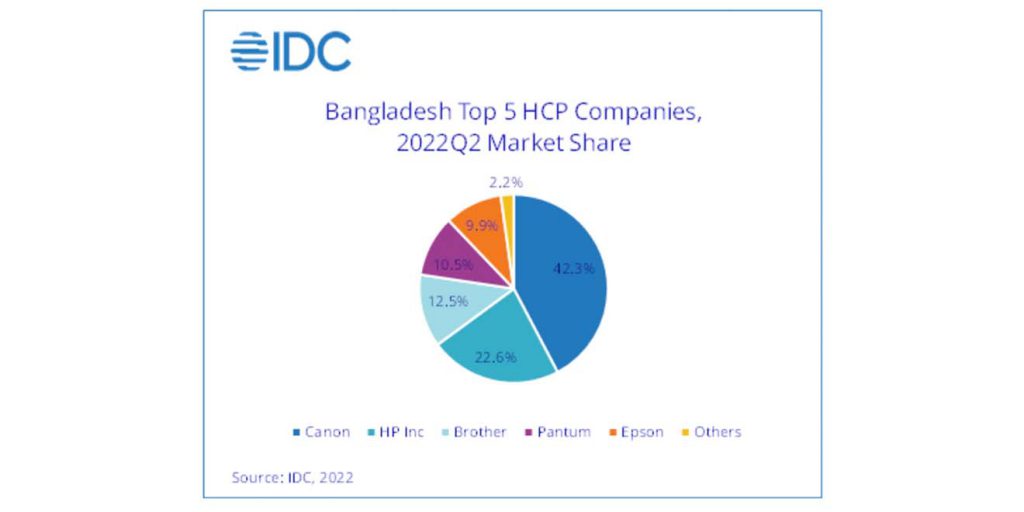 According to the latest data released by the International Data Corporation (IDC) Bangladesh’s hardcopy peripherals (HCP) market registered a shipment of 0.05 million units in 2022Q2 (April-June), declining by 14.6 % quarter-over-quarter (QoQ).

The inkjet segment noted a YoY growth of 36.1%. The channel partners noted a huge demand for inkjet printers as the market opened in 2Q22 post high covid cases in 1Q22, but it was limited by low shipments from key vendors. IDC said that HP faced a huge shortage of inkjet printer inventory in 1Q22. On the other hand, companies like Brother and Epson were able to secure good allocation despite the ongoing stock issues as the market continues to benefit from consumer demand and the recovery of smaller and medium businesses.

The laser segment (including copiers) recorded a QoQ decline of 27.9% while the laser copier segment observed a YoY growth of 136.5%, which can be attributed to the increasing demand for monochrome and colour copiers from the infrastructure and corporate segment. The laser printer segment observed a QoQ decline of 28.5%. This comes at the back of a severe shipment shortage for HP laser printers caused by production issues associated with entry-level monochrome printers.

“Increased covid cases and lockdown in the origin country, semiconductor shortage, and USD price fluctuations affected the overall HCP market in Bangladesh and resulted in the QoQ decline in 2Q22. Despite having a huge demand, laser OEMs were not able to ship the inventory in 2Q22. On the other hand, in the inkjet segment, the situation was better, where most vendors were able to ship more units than in the previous quarter. Also, imports through the unauthorised channel are posing a challenge for authorised channel partners,” said Apoorv Kandharkar, Market Analyst, IPDS, IDC India. Canon recorded a YoY growth of 67.7% and occupied the first position in the overall Bangladesh HCP market, capturing a market share of 42.3%. In the inkjet segment, Canon observed a YoY growth of 120.8% at the back of its ink tank segment. In the laser segment (including laser copiers) Canon occupied the first position with a market share of 46.1%. The company’s growth in terms of market share was driven by double-digit gains in laser shipments, specifically in the under $200 (€200.24) price band where demand was more from customer segments like SOHOs, corporates, and universities.

Brother occupied the third position in the overall Bangladesh HCP market with a market share of 12.6% while registering a YoY growth of 46.8%. In the inkjet segment, Brother occupied the fourth position in the market with a share of 18.9% and a YoY growth of 4.8%. Brother was able to win some government deals and supply them with colour inkjet multi-function printers. Brother recorded a YoY growth of 25.9% in the laser segment. This growth can be attributed to the large shipment of more than 30 ppm printers whose demand was generated from banks and SMBs.

“The laser printer shortage scarcity will continue till the end of 3Q22 as taka-USD exchange rates could pose a challenge for the importers and distributors in the coming months,” said Bani Johri, Senior Market Analyst, IPDS, IDC India.