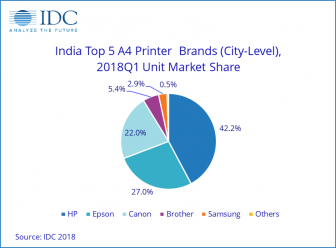 According to new data from IDC, ink tank printers are responsible for driving the market in 50 major cities across India.

It has been revealed via IDC’s Q1 2018 India Monthly City-Level A4 Printer Tracker that ink tank printers currently carry the most weight in the Indian printer market, with a quarter on quarter growth of 6 percent, “making up for nearly 40 percent of the overall printer volume and 74 percent of the inkjet volume”.

Inkjet printers were the market forerunners with a 53.3 percent share.

In terms of cities, Mumbai, Delhi and Chennai kept their top 3 positions when it came to sales volume, while elections “and channel expansion fuelled the growth of cities like Bangalore and Hyderabad with a combined quarterly sales growth of 12.2 percent in Q1 2018.

In the inkjet category, CISS/ink tank printers made up over 70 percent of the market, while the IDC data revealed that “demand for low-cost printing among SOHOs and SMBs in Tier 3 and Tier 4 cities generated approximately 54 percent of the ink tank sales volume.”

HP Inc maintained its “overall leadership” in the A4 Printer market, with 42.2 percent market share in 50 cities across India. The OEM’s “significant channel push” on entry level laser printers helped it maintain this leading position in the market.

Hyderabad, Bangalore and Pune were major cities driving growth for the brand. The West zone outpaced other zones in laser printer contribution to HP while the South zone was the highest when it came to inkjet printers. End user promotion and channel push helped HP to sell entry-level laser printers in tier 3 and tier 4 cities.

Epson registered top spot in the inkjet printer market with 50.5 percent market share in the category (27 percent overall A4 printer market). Epson’s dominance was “primarily aided by its vast sales and service network in smaller cities and towns”, according to IDC, which went on to explain that, “Hyderabad and Agra were the key growth markets for Epson – the upcountry movement from these cities through Tier 4 channel partners fuelled the brand’s growth.”

While the L380 has been the highest selling model for Epson, its M-series (Monochrome CISS) witnessed significant growth from Tier 3 and 4 cities as channel partners effectively developed newer markets such as cooperative banks, small and medium businesses such as C&F, legal agencies and State Government, for the series.

Canon secured the third-place spot in the overall A4 printer market, registering a 22 percent market share in 2017 Q4. Chennai, Pune and Ludhiana were the key growth markets for Canon. IDC revealed that “Canon refreshed its ink tank printer’s portfolio i.e. PIXMA G Series in January 2018 and aggressively pushed them with attractive channel schemes in the Tier 3 and Tier 4 cities. They also increased their outreach by adding several new retail partners which resulted in strong sales for its ink tank printers. Ink tank printers contributed to 52 percent of Canon overall Inkjet sales.”

Canon’s laser portfolio took second spot with a 25.4 percent market share in A4 Laser printer category. It had a weaker quarter due to both a supply gap and a lack of channel and end user promotions by the vendor. However, IDC indicates that “Increase in number of service partners is expected to increase sales of laser and inkjet printers in Q2 2018.”