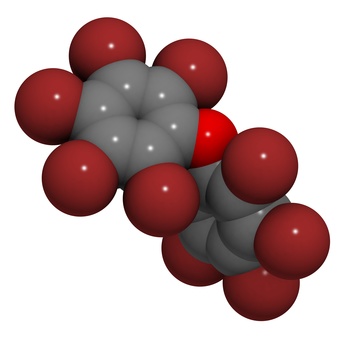 Chemical structure of a molecule of decabromodiphenyl ether, a brominated flame retardant.

The analysis of two new-build cartridges has revealed concentrations of a restricted flame retardant which exceed the permitted limit.

DecaBDE, the substance in question, the use of which above a particular quantity was banned in electrical appliances (including printer cartridges) across the European Union ten years ago, is described as “difficult to decompose” and has been assessed and classified as a Persistent Organic Pollutant (POP). It is also listed as a Substance of Concern by the European Chemicals Agency. The supplier of a product has a duty to inform commercial customers if that product contains a concentration of more than 0.1 percent of a Substance of Concern.

Many new-build cartridges contain a variety of different plastics and increased recyclates which can affect the melting point of the plastic and its flexibility. These product and design variations make remanufacturing complex and cost prohibitive and disposing of cartridges with higher levels of decaBDE could be problematic.

In a joint submission on the Recast of the Persistent Organic Pollutants (POPs) Regulation, ten of Europe’s leading plastics recycling organisations said “Over the last years, the recycling industry has developed advanced separation techniques to sort and eliminate plastics containing brominated flame retardants, so that the recycled plastics meet the concentration levels set in EU and international standards and regulations to protect human health and the environment. European plastics recycling companies are pioneering the development of technology and treatment processes to recover complex plastics from WEEE and ELVs.”

DI reported that the cartridges in question were from Static Control and in response to the story Static Control released a statement, in which it declared that “we take accusations of this sort very seriously.”

“As with most companies, we purchase the plastics in our products from many companies,” Static Control continued. “Each vendor assures us their products comply with all European laws. We try to use as many recycled products as possible, and the flame retardant is required for the successful reuse of recycled plastics, but in a level below the level prohibited by law.”

Commenting that “the competitor has provided few details”, Static Control also announced plans to “commission an external European-based testing facility to conduct tests immediately on some of our plastics to see if there is any validity in these accusations.”

“We want to assure our customers that we will investigate these claims thoroughly and take all necessary appropriate actions,” the company added.

There was also a response to the results by ETIRA, the European Toner and Inkjet Remanufacturing Association, which called for the EU and its Member States to “actively ensure that all cartridges imported into the European Union comply in every manner with European WEEE, REACH and RoHS directives and Intellectual Property regulations to protect the health and well-being of EU citizens and the environment.”

ETIRA added: “Eliminating toxic products from the market and ensuring cartridges are entirely reused could generate more than 16,000 new SME jobs across the European Union.”