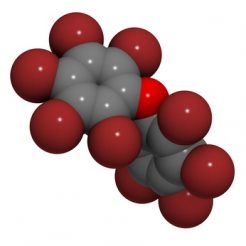 Chemical structure of a molecule of decabromodiphenyl ether (DecaBDE), a brominated flame retardant.

The European Union has unveiled a new provisional agreement to toughen rules on persistent organic pollutants (POPs), which it terms “the most lasting and polluting chemicals.”

The Romanian presidency of the European Council reached a provisional agreement with the European Parliament on updating regulations on POPs, including brominated-flame retardant DecaBDE, which has recently been found in the plastic casings of various printer cartridges, and which is currently already prohibited in certain quantities.

Furthermore, specific exemptions concerning the use of DecaBDE are introduced for aircrafts, motor vehicles and electronic equipment also in case of imports.

“The agreement we have clinched today means that we have reached an important milestone in protecting human health and our environment,” said Gra?iela Leocadia Gavrilescu, Romanian Deputy Prime Minister and Minister of the Environment. “This is about limiting the damage from the world’s most dangerous hazardous chemicals. By eliminating their production and banning their use, we can achieve maximum protection.”

The recast proposal ensures alignment of the existing regulation with the latest amendments to the Stockholm Convention, which provides the global legal framework for the elimination of the production, use, import and export of POPs. Several amendments align the regulation more closely with the general EU legislation on chemicals. As a result of these changes, there will be more clarity, transparency and increased legal certainty for all parties involved in the implementation of the regulation.

The new rules will maintain the existing high level of protection of human health and the environment in Europe, but some tasks foreseen under the regulation will be transferred from the European Commission to the European Chemicals Agency (ECHA) in Helsinki, as this is expected to reduce the overall costs and to expand the scientific knowledge available for implementation.

The agreement will now be submitted for political endorsement by EU ambassadors in the Council’s Permanent Representatives Committee.