Tests run by ETIRA have revealed the hazardous substance, use of which is prohibited by the EU over certain quantities, in a selection of new-build non-OEM cartridges.

The Recycler reported in September that an unnamed German organisation had ordered the testing of two non-OEM cartridges, finding high concentrations of decabromodiphenyl ether (DecaBDE), a halogenated flame retardant.

Because of its health risks, the substance has been prohibited in the EU since 2008 in electronics above certain levels, and fully prohibited in many other products. The original HP equivalent did not contain DecaBDE.

ETIRA, the European Toner and Inkjet Remanufacturers’ Association, recently purchased several new-build non-OEM cartridges, and commissioned tests from the German lab TüV Rheinland/LGA to see if there is a pattern. 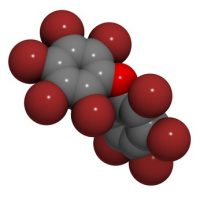 Chemical structure of a molecule of decabromodiphenyl ether (DecaBDE).

The results showed that four cartridges had DecaBDE levels ranging from 2,000 mg/kg to a staggering 17,000 mg/kg, although only 1,000 mg/kg is allowed under the EU’s RoHS directive (Restriction on Hazardous Substances) 2011/65/EU.

“These results are very worrying,” said Vincent van Dijk, Secretary General of ETIRA. “The tests showed that these were not isolated accidents, but that there is a major systemic issue in the overall market with newbuilt non-OEM cartridges from Asia that contain extremely high levels of a hazardous chemical. It is very serious that thousands of newbuild non-OEM cartridges are sold across Europe every day if many of them violate EU health and safety regulations.”

Van Dijk continued: “A lot of suppliers even claim that they are REACH and/or RoHS compliant, which they obviously are not. ETIRA again calls on EU and national authorities to remove all hazardous cartridges from the market, and customers should refrain from buying them.”

ETIRA will further ascertain the REACH/RoHS registrations and factories of origin of these products, as well as test more products. The organisation is also reporting many cartridge suppliers to national authorities for failure to register under WEEE.

UPDATE, 18 January 2019: HP’s Andy Binder, Vice President and General Manager of Office Supplies Solutions for HP Inc has weighed in on the issue of DecaBDE, offering the OEM’s stance on the subject.

“The results of the tests commissioned by ETIRA are quite concerning. It seems that eight out of nine cartridges tested were heavily contaminated with the toxic flame retardant decabromodiphenyl ether (DecaBDE). Usage of DecaBDE in electrical and electronic equipment was banned in the EU already in 2008 because of hazards to human health and the environment. HP already restricted DecaBDE in its General Specification for the Environment in 1998. If the results reported by ETIRA are true, this seems to indicate a systematic issue from a human health and environmental perspective. This problem is yet another good reason to rely on and print with original OEM cartridges, such as HP original toner cartridges, which are produced according to stringent quality, compliance and substance controls standards.”