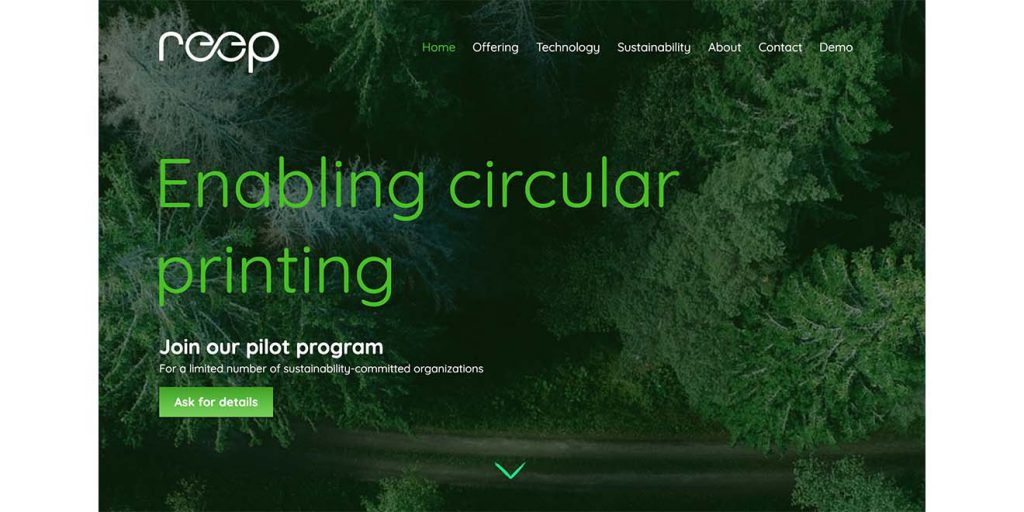 A new twist on cost per copy

New click charge technology removes the text right off the page, allowing the paper to be reused up to ten times.

Reep, a company based in Israel, is offering what it claims is “the print industry’s first re-printing capability” where it uses “laser technology to completely remove all the ink from the page.”

The company says: “the system allows users to print and re-print on the same sheet of paper, up to 10 times” and is “based on laser de-printing, combined with advanced materials that allow paper re-use.”

The print service is offered under an all-inclusive click charge and the customer is provided with the de-print devices and reusable paper and full support.

According to the company their service “eliminates the need to procure, store, collect, shred and recycle single-use printer paper,” and the de-printing process to brings “the circular economy to print operations.”

In September 2009 Thomas A. M. Counsell and Julian M. Allwood of Cambridge University published a paper in the proceedings of The Royal Society (London) entitled “Using solvents to remove a toner print so that office paper might be reused.” The paper studied the environmental impact of office paper recycling that might be avoided if toner print could be removed from paper in a way that left the paper immediately reusable.

A follow up paper was published in March 2012 by Julian M. Allwood, David Ricardo Leal-Ayala, M. Schmidt and I. Alexeev in the proceedings of The Royal society (London) entitled “Toner-print removal from paper by long and ultrashort pulsed lasers.”

Talking to the BBC in March 2012 having demonstrated that the technique worked in a laboratory setting they intended to develop a prototype device that would cost about £19,000 (€22.7 thousand / $23.3 thousand) at 2012 costs, but expected the price to fall if it went into production. thanks to economies of scale.

Our take on this: If the technology works, then it is an innovation that could be added to current MPS programmes and the paper savings could be huge and make a significant and very positive impact on sustainability, and probably dent the bottom line of a few paper manufacturers.