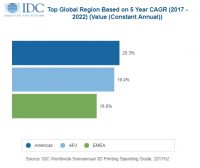 An update to the IDC’s Worldwide Semiannual 3D Printing Spending Guide has revealed that global spending on 3D printing, including hardware, software, and services, will grow to $23 billion (€19.9 billion) by 2022.

Two thirds of the worldwide spend total will be comprised of 3D printers and materials, according to the company, hitting figures of $7.8 billion (€6.7 billion) and $8 billion (€6.9 billion) respectively; services spending, meanwhile, will reach $4.8 billion (€4.1 billion) in 2022, due to surges in on-demand parts services and systems integration services. Software purchases will grow more slowly, however, with a five-year compound annual growth rate (CAGR) of 16.7 percent.

The USA will have the largest spending total by region next year, at $5.4 billion (€4.6 billion), with Western Europe second at $4 billion (€3.4 billion), the two regions between them providing nearly two thirds of all 3D printing spending throughout the forecast.

Marianna Daquila, Research Manager, Customer Insights and Analysis at IDC, said: “3D printing solutions are gaining traction outside of the traditional industries of aerospace and automotive manufacturing and healthcare. Professional services and retail will each see more than $1 billion (€867 million) in annual spending before the end of the forecast period, driven by the benefits of fully customised solutions.”

The three leading use cases for 3D printing are currently prototypes, aftermarket parts, and parts for new products, which between them will account for 45 percent of all spending worldwide next year.

“The emergence of higher speed 3D printers, production configurations, and the expanded range of materials available for 3D printing systems continue to enable wider adoption of 3D printing across numerous industries,” explained Tim Greene, research director, Hardcopy Peripherals and 3D Printing. “The development of some of these new materials is critical, because it increases both adoption and utilisation. Over the forecast period IDC expects revenue from 3D printed materials to surpass revenue from 3D printer hardware.”