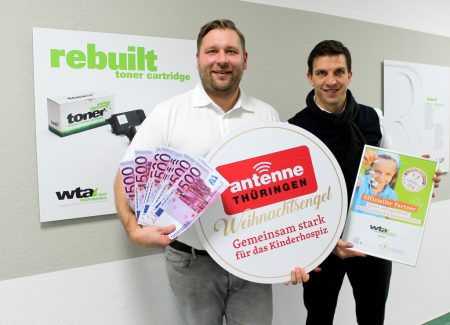 The German remanufacturer has made a donation of €6000 ($7,354) to the Kinderhospiz Mitteldeutschland Nordhausen e.V., which it has been supporting for 6 years.

The children’s and youth hospice is located in Tambach-Dietharz. This week, wta Carsten Weser GmbH handed over a donation of €6000 ($7,354), money which the company decided to donate instead of using to buy Christmas gifts for customers.

“For me, as an entrepreneur, but also as a family man, this makes more sense and I think that our customers see it that way. Maybe one or the other will be affected by our commitment in 2018,” said company boss Carsten Weser, speaking at the donation handover.

Since they first began supporting the hospice in 2012, wta has donated over €32,500 ($39, 835) for the care of its terminally ill children and their families. Carsten Weser also joined the Freundeskreis Kinderhospiz 4 years ago, an association of hospice benefactors, consisting of figures from business, politics and the arts, who have made it their mission to support the children’s and youth hospice in the long term.

“We meet regularly and develop ideas and projects in the spirit of the good cause,” so Carsten Weser.

In 2016 the remanufacturer, which was founded as a 2-man business in 1997 and has since grown to employ over 130 staff, was officially awarded the Beneficus Award for its social commitment.

“We are reactivating about 500,000 toner cartridges and over 550,000 ink cartridges per year, and demand is increasing. So, we want to give back some of our business success to society and how could that be better than helping families with terminally ill children. We will help you,” declared company owner Carsten Weser.

Over 40,000 children and adolescents in Germany suffer from terminal, life-altering illnesses. The Mitteldeutschland hospice gives affected families the opportunity to live together in the facility for up to 28 days, and promotes holistic care and support, so not only the child but also the entire family is offered optimal levels of love, care and assistance.

The nonprofit charity association is permanently dependent on donations to the maximum to maintain its important aid offer. More than €1,000,000 ($1.2 million) is needed in donations per year to ensure the operation of the social institution alone, since the current funding by the health insurance companies is not sufficient. Hundreds of affected families from all over Germany have been using the inpatient service offered by the sponsoring association since the inauguration of the children and youth hospice in November 2011.

Since 2008, €6,700,000 ($8.2 million) has been invested in the purchase and conversion of the former administration building of the Thüringer Fernwasserversorgung in Tambach-Dietharz in the Thuringian Forest to the Children and Youth Hospice Central Germany.

92 percent of this investment was raised through donations from private individuals, associations, schools and businesses, and non-government grants from foundations.

Thanks to this help, a form of “second home” for these affected families was created, designed to be far as possible from any hospital atmosphere. The inpatient children’s hospice is run by a non-profit organization.

A six-headed volunteer board has been spearheading developments since 2005, and has initiated East Germany’s largest volunteer social project over the past ten years. The founder, initiator, and – until now – honorary CEO Klaus-Dieter Heber was awarded in 2015 with the “Order of Merit of the Federal Republic of Germany”.

In 2018, the sponsoring association is planning the urgently needed expansion of the children’s and youth hospice, as demand is steadily rising. As a result, in an as-yet unrepaired outbuilding, new guest rooms, therapy rooms, community and social rooms, as well as a wood workshop, are to be created. For this an additional €1,000,000 ($1.2 million) in investment costs are needed. Unfortunately, there are currently no state subsidies available for this purpose.

To learn more about the hospice, visit www.kinderhospiz-mitteldeutschland.de or www.facebook.com/kinderhospiz.