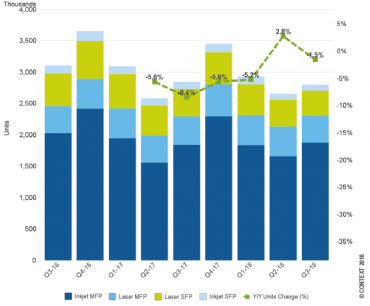 The latest distribution data provided by CONTEXT reveals a decline in sales of printer hardware in Western Europe in Q3 2018.

Sales were down by -1.5 percent year on year, which, as CONTEXT notes, is a reversal of the “positive trend recorded in Q2 2018”.

As the IT market intelligence company points out, both the second and third quarters tend to be the “weakest” in the year, with sales in Q3 2017 reported as “particularly low”, at -8.4 percent compared to the same period in 2016.

Inkjet multifunction printers account for approximately 67 percent of all sales, and unit shipments were up in Q3 2018 by 1.8 percent, but this positive performance was offset by “the negative performance of the other printing categories”.

As well as the decrease in Q3 sales, overall revenues were also slightly down by a figure of -5 percent, with sales of inkjet MFPs being the only bright spot.

CONTEXT explains, “This is primarily because the ASPs of laser devices, especially laser MFPs, are continuing to decrease and sales of these generate more than 41 percent of all imaging revenue.”