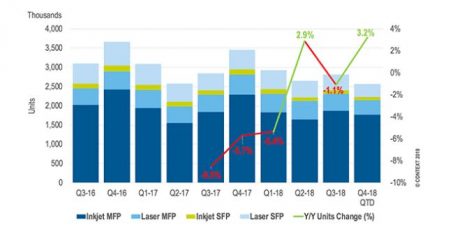 Sales of printer hardware through distributors in Western Europe (WE) during the first part of Q4 2018 (October and November) increased by 3.2 percent year-on-year, according to CONTEXT’s latest distribution data.

As CONTEXT explained, inkjet devices continued to outperform laser devices and sales of consumer-targeted inkjets increased. In fact, the data reveals that sales of consumer printers during this part of Q4 2018 more than compensated for a double-digit decline (-13.9 percent) in sales of business-targeted models to drive overall imaging growth.

Sales of multifunction printers (MFPs) were up by 5.4 percent year-on-year with continued growth for both inkjet and laser MFPs (sales were up by 5.8 percent and 3.2 percent, respectively). However, this was offset by the negative performance of single-function printers (SFPs): sales were down by -6.6 percent overall and -15.1 percent for inkjet SFPs. This pattern confirms that the shift from single – to multifunction devices continues, says CONTEXT.

Sales of inkjet MFPs were better over these two months than in October and November 2017. Monochrome and A3 MFPs were still driving inkjet growth with sales 59.7 percent and 13.7 percent higher than the previous year. Entry-level ranges (priced up to €400) continued to lead sales of consumer-targeted MFPs, accounting for 99.9 percent of units and generating €68?million. Sales in the higher price bands of this level also grew significantly, up by 26.4 percent for €150–200 printers, 65.4 percent for those costing €200–300 and 51 percent for devices priced at €300–400. However, the greatest sales increase was in the €400–500 price band, which grew by 129.8 percent year-on-year.

Laser MFP volume sales were up by 3.2 percent in the first two months of Q4 2018, added CONTEXT. The exceptional performance of consumer-targeted devices (sales up by 127.9 percent) was offset by a drop of 16.1 percent for the business-targeted models that account for 70.5 percent of laser MFP sales and 87.9 percent of revenue. 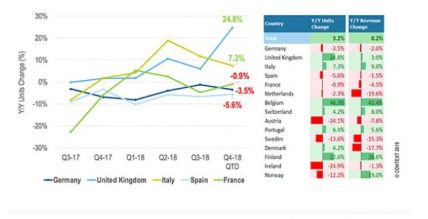 Imaging sales and revenues for the first part of Q4 2018 grew in several WE countries, particularly Italy and the United Kingdom where there were double-digit increases in sales. Italy was also one of the only countries that saw growth in nearly every category (inkjet SFPs were the exception) and this was driven by the strong performance of Samsung (sales up 186.6 percent year-on-year), Canon (21.2 percent), Kyocera (14.6 percent), Xerox (12.4  percent) and HP (3.4 percent), which share over 70.2 percent of the country’s printer market.

The increase in the United Kingdom was driven by the vendors which account for 81.4 percent of the British market: HP (sales up 72.1 percent), Canon (+43.7 percent) and Brother (27.2 percent).

But it was Belgium that registered the highest growth over this period – in terms of both units sold (up 46.3 percent year-on-year) and revenue (42.4 percent) – with the increase driven by the three companies that dominate the country’s printer market: Samsung (sales up 354.8 percent), Epson (209.8 percent), and HP (23.8 percent) together hold a share of over 78.1 percent.

Finland also registered double-digit growth in both measures (year-on-year unit sales up by 22.6 percent and revenue by 26.6 percent) with the increase driven by Samsung (sales up 334.7 percent) and Lexmark (139.8 percent), which share almost 5 percent of the country’s printer market.