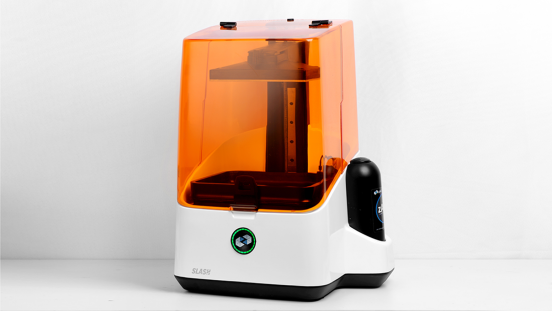 The California based company’s new line of printers feature the power of Uni-Directional Peel (UDP) technology, a patented new printing feature that makes SLA-LCD printing faster and more accurate than ever. Known as an industry innovator, following the 2016 release of their popular SLASH series desktop 3D printer, UNIZ has once again made waves in the 3D printing community with an updated version of their SLASH series. The SLASH OL and SLASH +, models deliver speed that is up to hundreds of times faster than other printers in their class with unparalleled performance and quality made possible by the patented UDP technology that allows incredible improvements in printing speed by minimizing the peel time of a conventional layered SLA process by extracting heat with a liquid cooling coil directly below the printed layer. The new UDP technology was demonstrated at this year’s CES 2018 and solves the heat problems that limit the speed of other SLA-LCD printers. The result is faster speed and no loss of model detail.

In addition to the new SLASH models presented, UNIZ is simultaneously releasing two powerful new industrial grade 3D printers. Designed for industrial manufacturing and high-output production, the SLTV series feature the new UDP technology with an improved LCD photo curing 3D process for industrial applications. With their new printers, UNIZ “has proven that high speed and affordable cost can coexist for prosumers, makers, artists and industry”, according to the company.

The company has expressed its desire to thank the hundreds of loyal fans and backers of its campaign.