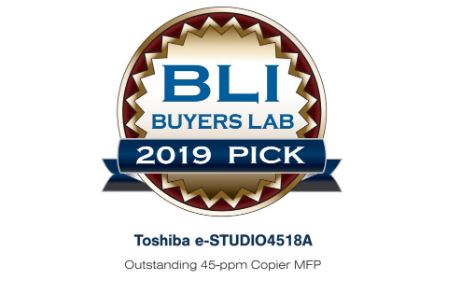 “Scanning will be a snap, and fast, with the Toshiba e-STUDIO4518A, thanks to simple programming of destinations and scan speeds that are among the fastest in its class,” said Keypoint Intelligence Associate Director of Copiers/Production George Mikolay. “A choice of four menu designs for scan and copy, from two of which the most commonly used settings are quickly found and programmable, and user-by-user customisation, also allow users to program jobs quickly and efficiently. And with a perfect reliability performance, fast print speeds, and standard tandem printing to help complete large jobs even faster, the device promises timely delivery of every job, every day.”

Buyers Lab Picks are described as “hard-earned awards”, as they are based on rigorous testing, including an extensive durability assessment and evaluation of key attributes such as usability, image quality, and value. Each product that passes Keypoint Intelligence lab testing earns a Buyers Lab’s Recommended or Highly Recommended seal as well as the analyst company’s Certificate of Reliability, with the best performers qualifying as Pick contenders.