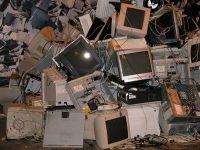 The population of Switzerland returned nearly 130,000 tonnes of e-waste in 2017, a slight drop in total weight but a rise in the number of devices.

According to CE Today, the amount of WEEE returned last year had a total weight of 129,218 tonnes – a dip of 6.2 percent from the year before, which the disposal company Swico Recycling attributes to changes in the technology itself, with newer televisions increasingly becoming lighter than their old tube predecessors, for example.

The total number of devices recycled increased, lending credence to Swico’s opinion. The company also added that the recycling system is attracting “more and more manufacturers and importers”, with the number of collectors increasing from 42 to 568.

The collection service in Switzerland is free, with an additional levy charged at the point of purchase instead, as an early recycling fee. Disposal is shared between Swico and Sens eRecycling; the latter handles old household appliances, and lightbulbs (roughly 62 percent of Swiss WEEE), whilst the former deals with computer science and telecommunications equipment and consumer electronics.