Malta crisis as WEEE piles up 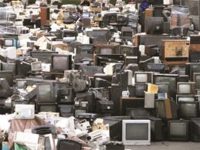 A rapid accumulation of e-waste at sites across the island nation is beginning to cause issues.

According to the Malta Independent, Eurostat, the statistics body of the European Union, found no data for Malta’s collection rate in either 2015 or 2016, with the most recent data being nearly four years old, showing an 11.9 collection rate in 2014, which was the lowest in the EU; for context, the body’s target collection rate since 2016 has been 45 percent, almost four times Malta’s most recently verified rate.

The rate is calculated on the basis of the total weight of WEEE collected, as a percentage of the average weight of EEE placed on the market in the three preceding years.

In Malta, WEEE is picked up by refuse collectors, before being deposited at WasteServ’s Civic Amenity sites, from where it will be collected again by either of the country’s two e-waste recycling schemes, WEEE Malta or WEEE Recycle, before being taken away for recycling.

Yet CEO of WasteServ Tonio Montebello recently revealed that the two aforementioned schemes were not picking up the waste, and as a result it was beginning to pile up at the company’s sites across the country. The scale of the issue was illustrated by Montebello’s admission that in 2016 and 2017, WasteServ had ended up disposing of the WEEE itself; however, owing to the length of the process required to obtain a waste export permit (around six months), in 2018, the e-waste has been building up and up – leading to criticism mainly of WasteServ.

Montebello insists that his company has been attempting to find alternative storage premises to remedy the situation, but various mooted options have proved fruitless. The problem was further exacerbated by a refuse collectors strike last week, which was only narrowly averted by WasteServ changing its plans and continuing to accept the bulky e-waste.

According to Montebello, the Environment and Resources Authority (ERA) bears responsibility for the regulation of the WEEE collection schemes. When questioned by the Malta Independent, the ERA conceded that “there has been an accumulation of WEEE at WasteServ’s plants, and said that “a number of entities” were cooperating to find a solution for the problem.

The ERA also opined that the issue was caused in part by Malta having no infrastructure for treating e-waste, and that it must be exported, with the additional requirement of conformance to a variety of procedures and permits. Furthermore, the country’s island status means all export must travel through shipping lines, causing further delays.

The ERA further warned that it would not be averse to taking action against those who had failed in their obligations, in order to make sure that such a problem does not reoccur.