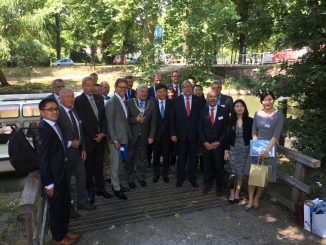 The European branch of Ninestar has attended a special luncheon in Utrecht, hosted by the King’s Commissioner of the Netherlands for the Chinese ambassador.

Oleg Zhao, Seine Holland’s General Manager, revealed that it was his “great honour” to attend the luncheon, “on the occasion of the working visit to Utrecht by the ambassador of the People’s Republic of China [H.E. Wu Ken] to the Kingdom of the Netherlands”.

Zhao explained, “Both sides give high comments for today’s Sino-Dutch all round cooperation and more than 20 years friendship between Utrecht province and Guangdong province.”

He went on, “Seine as the first company from Guangdong that settled in Utrecht, we have been developing our printing business well for more than 15 years in European market” and thanked the company’s business partners, colleagues, NFIA and Utrecht for their help and support.