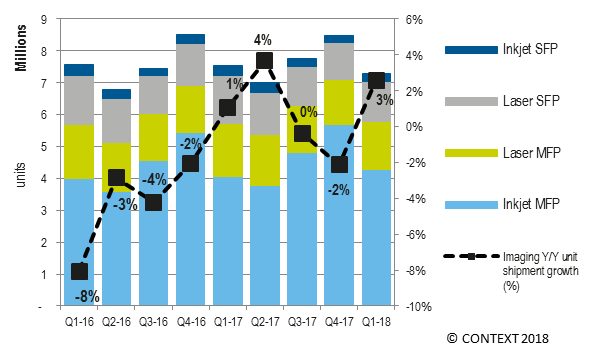 Unit shipments of printer hardware to Europe, the Middle East and Africa (EMEA) grew by three percent year-on-year in Q1 2018 for only the third time in the last two years. The positive performance was largely due to increased sell-in in the Middle East and Africa (MEA) and Central and Eastern European (CEE) regions, which was sufficient to offset declines across Western Europe (WE), according to data published by CONTEXT, the IT market intelligence company.

Sell-in of printers to Central and Eastern Europe (CEE) for the quarter were up sharply with the region registering a 10 percent year-on-year growth – the first increase in sell-in in the past year. There were more unit shipments in all categories, but the overall positive performance was largely driven by a eight percent year-on-year increase in laser hardware. Sell-in to Russia makes up almost half of all the sales to CEE so a 10 percent increase there was another major driver. There was significant growth in sell-in of inkjet multifunction printers (MFPs) to the Czech Republic, Romania and Russia.

The Middle East and African (MEA) region continued to outperform other regions but the 17 percent year-on-year increase in unit shipments was similar to that seen in the previous quarter and is on the back of a drop last year. The overall increase was largely driven by inkjet MFPs, although there was rising growth in all other categories too.

Sell-in levels of printer hardware continued to increase in UAE, where the growth of 13 percent year-on-year was driven mainly by inkjet MFPs; double-digit growth in Turkey, Saudi Arabia and South Africa followed particularly weak performances in Q1 2017. Although unit shipments of inkjet MFPs continued to grow, declines in other categories led to an overall decrease in Israel and Egypt.

Sell-in to WE accounts for about 65 percent of all printer hardware shipments to EMEA and declined by three percent year-on-year in Q1 2018 – although this was an improvement on the previous two quarters. Sell-in levels of single-function devices continued to fall, making a significant contribution to the overall decrease, while those of MFPs were up on Q1 2017. While most WE countries saw printer sell-in fall, there was positive performance in France and Italy where shipments grew by one percent and two percent respectively, largely due to strong sell-in of inkjet MFPs.