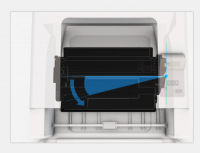 The Chinese company’s new solution for Canon dongle gear patents has been unveiled.

With many aftermarket companies developing new designs of coupling members in response to Canon’s ITC cases of patent infringement, Ninestar has developed two different new designs, which claim to both avoid infringement and “still provide a smooth and proper engagement.”

One of these designs is the “piston style” gear in which a button or lever causes the gear to move in and out of the drum. According to Ninestar, “this gear has been widely recognised by the market as providing high quality, stable performance with a great user experience.” Ninestar has continued to improve the performance of this design, and has received over 53 patents, with an additional 36 patent applications still pending. The company reports that “some competitors were so impressed that they copied this proprietary design,” forcing Ninestar to file litigation to enforce its patents.

The second of these designs has “been in the works for some time at Ninestar.” It uses a technology that assists the user in putting the cartridges into or out of printers at an angle, some with a special gear that moves parallel to the axis of the drum rather than in and out. The design, which Ninestar will market as the ‘Sidewinder’, again provides “a great user experience,” according to the company. Ninestar recently made further improvements to this design, which was the first to be cleared by Canon in the most recent ITC proceeding. Ninestar has also filed several patents and patent applications for the Sidewinder. Competitors have recently introduced similar designs, and “Ninestar will enforce its patents as necessary,” it affirms.