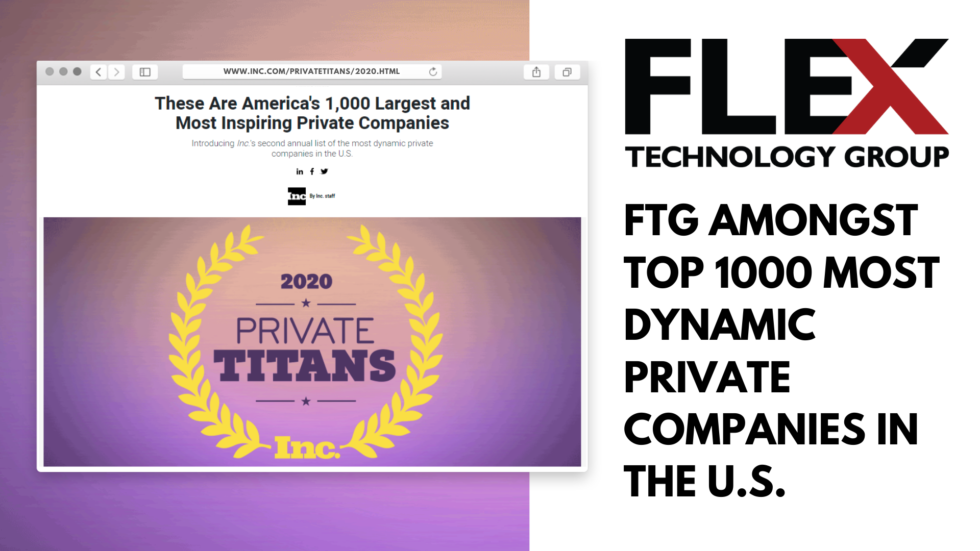 Flex Technology Group has been named one of America’s 1,000 largest and most inspiring private companies on the Private Titans of 2020 List by Inc. Magazine.

Inc. Magazine named Flex Technology Group (FTG) on its 2020 Private Titans List, which ranks the company amongst the top 1,000 most dynamic and inspiring private companies in the United States. FTG was listed alongside other prominent private companies, including Airbnb, DoorDash, SpaceX, Kendra Scott, Epic Games, and Swift Transportation.

“Today, staying connected to our employees, customers, and communities is more important than ever. Flex Technology Group is honoured to be named on Inc. Magazine’s Private Titans list, and we would like to reassure you of this company’s resilience during these times as well as long after,” stated Frank Gaspari, CEO of Flex Technology Group.

Inc. developed the list in partnership with PrivCo., which has created an extensive database of privately held companies. The Inc. Private Titans list utilises financial modelling and other methodologies to analyse company performance, generating qualitative insights and investment guidance that determine listings. The 1,000 companies on Inc.’s list were judged on a weighted score based on measures like sales and employee growth, balance sheet strength, valuation, and ability to raise capital.

Inc. Magazine also named Flex Technology Group on its 2019 Inc. 5000 list of fastest-growing private companies in America. Not only did FTG break the top 1000 in 2019, but this also marked the company’s tenth consecutive year making the prestigious list.