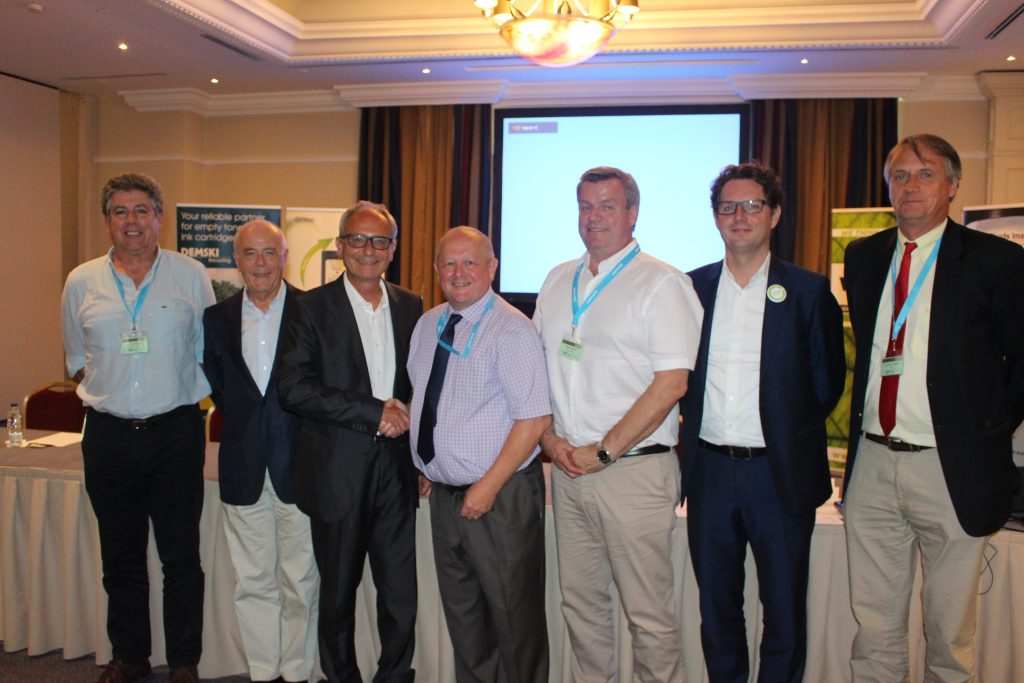 At today’s General Assembly of the European remanufacturers’ association, held concurrently with The Recycler Live: Budapest, David Connett was formally voted in as the new President, succeeding Christian Wernhart, who is stepping down after twelve years in the post. The Recycler spoke exclusively to the new President, as he looked ahead to his time at the helm.

Questioned on his key ambition for his presidency, Connett told us that he aimed to “raise the awareness and benefits of reuse over the negative impact of single-use products, and in doing so connect the wider society with the long-held values of ETIRA and its membership.”

It seems Connett has taken up the post at the right time, as the debate over single-use plastics becomes a hot topic far beyond simply the remanufacturing sector. In the United Kingdom, for instance, new legislation is being drawn up to tackle single-use plastics such as water bottles, cotton buds, and drinking straws, and Connett is looking forward to ETIRA playing its part in the revolution.

“It really is good to see governments, NGOs, TV programmes and, most importantly, the general public becoming more in tune with the need for effective and sustainable reuse of everything we produce,” he explained.

Connett went on to call the shift in focus from recycling to reuse “something ETIRA and the reuse community has been advocating and promoting for many years.  We will keep engaging and promoting the reuse is better than single use message at every opportunity.”

According to research from 2015, Earth’s oceans are choked with enough plastic waste to fill five grocery bags for every foot of coastline on the planet, and as the world’s governments wake up to the problem, Connett is expecting ETIRA and its members to lead the way.

“I think that ETIRA members are ideally placed to lead by example, and ETIRA will work hard to demonstrate what we can do,” he forecast.  “But let’s not be under any illusions, the pandemic is real. It takes 450 years for a single use 500ml water bottle to break down into micro plastics and these micro plastics are now entering our food chains. Today’s plastic pollution could be tomorrow’s new illnesses and diseases.”

Connett also had a warning for producers, with a stark prediction that the bubble is set to burst eventually as global economic trajectories change. “Oil will rise in price, especially as countries begin banning diesel and petrol engine vehicles,” he warned. “This will lead to a rise in the cost of new plastics and, who knows, by 2040 we may even see landfill sites being opened up to recover plastics and other valuable resources.”

Connett was instrumental in ETIRA’s foundation in 2003, and also served as its Vice President for 12 years until 2015. Before this, he held a colourful variety of positions with numerous companies, and his wide-ranging CV also includes time in the Royal Air Force, Oxford City Council, and Publisher and Managing Editor of The Recycler.

“Before founding ETIRA nearly twenty years ago, I spent several years in local politics,” he recalled, “which is about engaging with people, listening to their concerns and engaging at all levels to positively reflect their views to a wider audience and to bring about beneficial change.” Connett is hoping to bring this expertise, and that gleaned from over a decade as ETIRA’s Vice President, to his new role, where he aims to “engage with members, and to represent the association at all levels across the commercial and political spectrum.”

Connett becomes President at a crucial time for the remanufacturers’ association, and for the industry as a whole. The emerging competition of clones and new-builds from the Far East, and the increased vigilance of OEMs, keen to fend off any challenges to their domination, present a complex gamut of hurdles that Connett will be tasked with surmounting.

“The whole office imaging sector is in a state of change,” reflected the new President, who acknowledged he was relishing the task. “It is an exciting challenge, to ensure that ETIRA members are positively placed to benefit from any and all market changes, and their voice is heard.”

Quizzed on what he was most nervous about, Connett reiterated his plans for the association, and said that “the most daunting aspect is to try to ensure we deliver.”

Discussing the threat of clones and new builds in particular, the President called ETIRA’s official position on clones “well-documented”; he labelled new builds, on the other hand, as a “disruptor” to the market, drawing a parallel between their place in the industry, and the effect of similarly-operating disruptors in other industries, such as the hospitality and transport sectors.

“Since clones first appeared on the market, new build cartridges containing a variety of technology and innovation have become a well-established disruptor in the market.  Just look at all the legal actions going on around the world with Uber and Airbnb; in any market that is being disrupted it is ultimately for lawyers to argue and judges to judge on the validity of disruptors.”

Connett went on to elaborate on what ETIRA could do in the face of such a disruptor, saying that the association “will continue to engage at the highest levels to influence and drive policies that ensure that whatever is legally placed on the market is fully reusable and or recyclable.”

The other key threat to the remanufacturing industry, of course, comes from above, in the form of the OEMs and their increasingly frequent legal challenges to aftermarket companies.

“At the moment, it is a binary battle between OEMs and the reuse community,” reflected Connett. “They sue, we innovate, they sue again and so it goes on. But the reality is the OEMs enjoy the largest, if not an almost dominant market share, but effective reuse does require new products to be placed on the market.”

Beginning his presidency on the front foot, Connett came out fighting, willing to take the battle to the OEMs, with the belief that ETIRA needs to “challenge the OEM community regarding every aspect of what they do –  from the patents they register to the products they place on the market.”

The goal, he explained, is to “ensure [the OEM products] offer true and tangible commercial, environmental and reuse benefits.  A case of keep your friends close, but your enemies closer.”

Under his leadership, Connett pledged to “raise the profile of ETIRA members of the reuse community, to deliver real and tangible benefits of being a member.” He concluded with a rallying call for the association, and the industry as a whole, with a message that “ETIRA will continue to campaign, fight, lobby, and promote reuse over single use at every opportunity.”