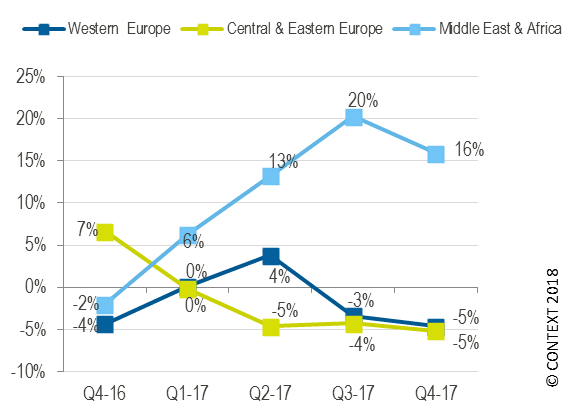 New distribution data published by CONTEXT reveals that unit shipments of printer hardware to the region have “remained stable”.

This was due to “healthy growth across the Middle East and Africa” offsetting a sell-in decline across Europe.

The MEA region “continued to outperform other regions”, witnessing an increase of 16 percent in unit shipments, although in comparison to Q3 2017, there was a drop in “the performance of most categories”, apart from inkjet multifunction printers, “which continued to show rising growth.”

Western Europe sell-in “accounts for more than 67 percent of all printer hardware shipments to EMEA”, registering a decline of -5 percent y-o-y this quarter. Similarly, sell-in levels of laser printers also dropped, making “a significant contribution to the overall decrease”.

However, sales of single-function inkjet printers rose compared to the same quarter in 2016.

The UK experienced an 11 percent year-on-year decrease “driven mainly by falling sales of inkjet MFPs” but Italy witnessed a 6 percent growth “due to increasing demand for inkjet MFPs, and flat performance in France.”

Central and Eastern Europe (CEE) mirrored the performance of Western Europe, with its -5 percent year-on-year decline “driven by falling sales of laser hardware while sell-in levels of inkjet MFPs and SFPs continued to increase, registering growth of 7 percent each.”

Russian sell-in accounted for 44 percent of all printer hardware unit shipments to CEE, with “the increasing demand for multifunction inkjet devices” contributing to a 1 percent y-o-y growth this quarter. Meanwhile, in Poland and Hungary, sell-in levels “climbed once again”, with increases of 11 percent and 15 percent respectively, due to the demand for inkjet MFPs.

Shipments to “most other major countries in the region” declined, due, for the most part, to “a reduction in the number of laser technology devices shipped.”