Costco announced the permanent closure of all their instore photo departments effective from 14 February. The instore ink Refilling, passport photos, photo restoration and the YesVideo Home Movie Transfer Services will all close permanently after Sunday, 14 February 2021. Other instore services will be available online only.

Costco has been using RIS InkCenter refill stations supplied by California based Retail Inkjet Solutions (RIS). The simple concept enabled customers to take their empty cartridges to Costco’s Photo Centre and have them cleaned, tested, and refilled while they wait only applied to original cartridges.

USA Today reported that in an email sent to members, Costco said ” Since the introduction of camera phones and social media, the need for printing photos has steeply declined, even though the number of pictures taken continues to grow,” the email said. “After careful consideration, we have determined the continued decline of prints no longer requires on-site photo printing.”

The warehouse-style retailer currently operates more than 500 US stores out of 803 globally and e-commerce sites in the U.S., Canada, the United Kingdom, Mexico, Korea, Taiwan, Japan, and Australia. 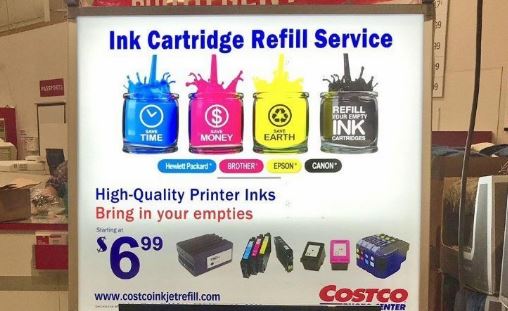 In recent years RIS has been expanding in European markets and has instore filling stations in Belgium, France, Germany, Luxembourg, Spain and Switzerland.

In October 2020, The Recycler reported that Swiss supermarket retailer Migros Geneva announced RIS InkCenter installations at two retail locations in Switzerland. The expansion into the Swiss market with Migros followed an earlier successful InkCenter launch at Migros France in July 2020.