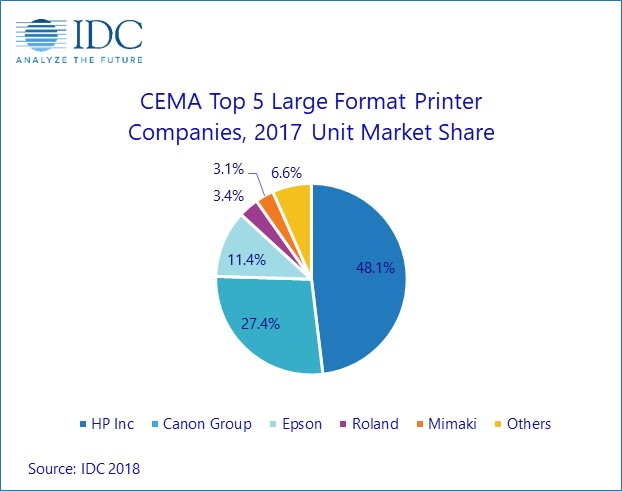 The large format printer (LFP) market in Central and Eastern Europe, the Middle East and Africa (CEMA) grew 8.1 percent year on year in 2017, with shipments reaching 40,705 units, according to IDC.

Shipment value in the same period contracted by 0.4 percent to $305 million (€247.5 million). The drop in market value is related to the fact that the share of cheaper products in total shipments increased in the most of the toner/ink types; there were also far fewer installations of high-end LFPs in 2017 than in 2016.

Stable year-on-year growth was reported in Africa both in unit (5.7 percent) and value terms (6.2 percent). While many country markets on the continent are unsaturated in terms of printing devices, many countries have developing economies, which limits demand for large format printers.

The market recorded 6.3 percent year-on-year growth in terms of units and 1 percent in value, mainly thanks to continued market recovery after the economic downturn in such countries as Kazakhstan, Russia, and Ukraine, as well as in some smaller, former USSR countries. Aggressive product promotion and pricing by some vendors also drove growth.

Strong demand for aqueous CAD printers drove year-on-year unit growth of 13.9 percent in the region. The market contracted by 4.7 percent in value terms, largely because of substantially fewer sales of high-end machines compared to 2016.