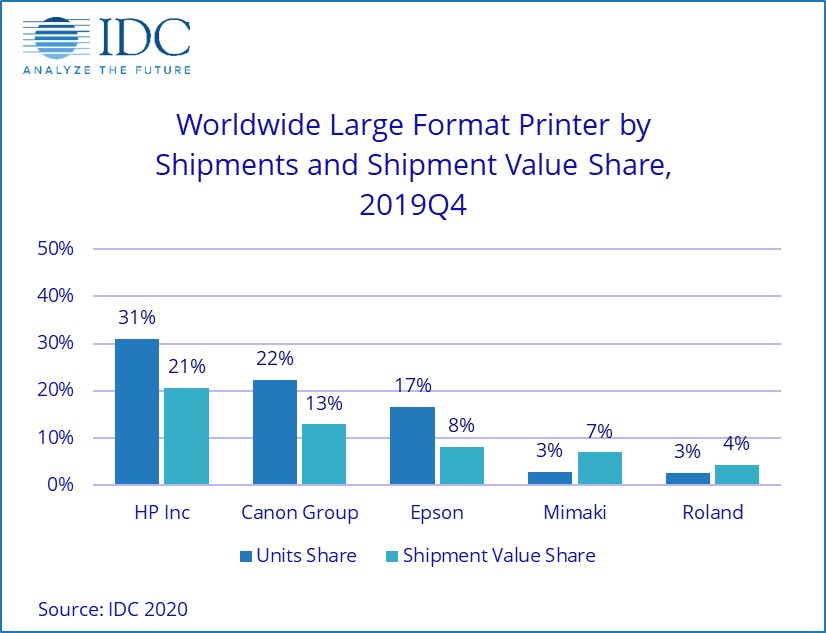 Worldwide large format printer market delivers mixed results in the fourth quarter of 2019, according to IDC.

“Shipment growth in the Europe, Middle East, and Africa (EMEA) region offset declining shipments in the Americas and Asia/Pacific regions, driving modest total shipment growth overall,” said Tim Greene, Research Director, Hardcopy Solutions at IDC. “Around the world we continue to see solid growth in technologies such as UV-curable and dye-sublimation inkjet printers. Many of the new solutions coming to market are based on these technologies with additional vendors jumping into these technology segments.”

Regional Highlights include that the EMEA region grew by 14% in 4Q19, recovering from a very soft third quarter with the strongest growth coming from Western Europe.

Shipments in Canada and Latin America each grew by more than 10% in 4Q19 but declines in the US dragged total shipments in the Americas region down by about 3.5% in the quarter.

Whereas shipments in the Asia/Pacific region (excluding Japan) grew modestly in 4Q19, by about 1.5%, shipments in Japan declined by about 16%. This is an area that IDC is watching closely due to concerns not just about the regional market, but also because many of the large format printers sold by global manufacturers are manufactured in the region and coronavirus concerns may acutely impact the large format printer market.

Canon’s share of all large format printer shipments in Q4 was 22%. Its share of shipment value grew to 13% based on the strong performance of the more production-oriented parts of the Canon portfolio.