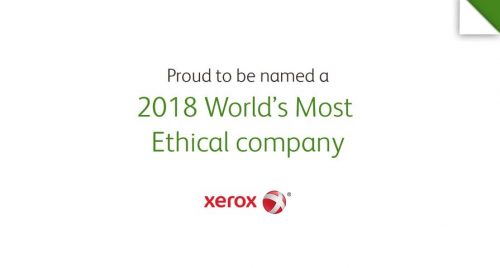 The OEM has been named one of the 2018 World’s Most Ethical Companies for the 12th consecutive year.

Xerox announced that the company has been recognised by the Ethisphere Institute, a global leader in defining and advancing the standards of ethical business practices, as one of the 2018 World’s Most Ethical Companies.

Xerox has been recognised every year since 2006 and is one of only two honourees in the Information Technology Services industry, “underscoring their commitment to leading with integrity and prioritising ethical business practices”, according to the OEM.

In 2018, 135 honourees were recognised, spanning 23 countries and 57 industries. The twelfth class of honorees had “record levels of involvement with their stakeholders and their communities around the world.” Measuring and improving culture, leading authentically and committing to transparency, diversity and inclusion were all priorities for honourees.

“Every decision we make and every action we take should demonstrate our unwavering commitment to ethical business conduct,” said Xerox CEO Jeff Jacobson. “Our continued recognition by Ethisphere is a reflection of that promise.”

The World’s Most Ethical Companies assessment is based upon the Ethisphere Institute’s Ethics Quotient® framework, which offers a quantitative way to assess a company’s performance in aspects of corporate governance, risk, sustainability, compliance and ethics.

Scores are generated in five key categories: ethics and compliance program (corporate citizenship and responsibility), culture of ethics, governance and leadership, innovation and reputation. All companies that participate in the assessment process receive their scores, providing them with valuable insights into how they stack up against leading organisations.