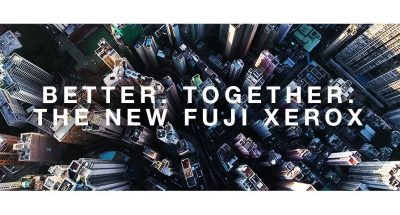 A “definitive agreement” has been announced by the two OEMs, despite recent shareholder dissent.

After weeks of debate and speculation, Xerox and Fujifilm have today announced a “definitive agreement” to combine Xerox and their Fuji Xerox joint venture. In a press release, the company declared it will be “a global leader in innovative print technologies and intelligent work solutions”, and forecasts annual revenue of $18 billion (€14.4 billion), alongside having leadership positions in what it terms “key geographic regions.”

It is speculated that the move will lead to a significant cash boost for Xerox’s shareholders, and substantial levels of interest. The combined company has asserted it will have “enhanced global scale and reach” as a result of the agreement, as well as “world-class innovation capabilities” and “an improved financial profile”, providing flexibility that will reportedly allow it to support strategic investments in growth, as well as attractive capital returns.

“Fujifilm and Xerox have fostered an exceptional partnership through our existing Fuji Xerox joint venture, and this transaction is a strategic evolution of our alliance,” said Shigetaka Komori, Fujifilm’s Chairman and CEO. “The Document Solutions business represents a significant part of Fujifilm’s portfolio, and the creation of the new Fuji Xerox allows us to more directly establish a leadership position in a fast-changing market. We believe Fujifilm’s track record of advancing technology in innovative imaging and information solutions – especially in inkjet, imaging, and AI areas – will be important components of the success of the new Fuji Xerox.”

Mr. Komori added, “I am confident that Fujifilm’s ability to drive change as well as its experience of successful reinvention will give a competitive edge to the new Fuji Xerox, delivering significant value creation to shareholders of both the new Fuji Xerox and Fujifilm,” he added. “We are delighted to welcome Xerox and its employees to the Fujifilm family and look forward to combining our strengths towards jointly shaping the future of our industry.”

The new Fuji Xerox will be “well-positioned to lead in growing business areas such as high-speed inkjet, industrial printing and workplace solutions,” a press release announced, “while leveraging Fujifilm’s extensive technologies.” Together, it will have six innovation labs and over 6,600 engineers, will boast nearly 11,500 patents, will operate in over 180 countries worldwide, and aims to return to revenue growth by the year 2020.

Jeff Jacobson, CEO of Xerox, was optimistic for the future, saying: “The proposed combination has compelling industrial logic and will unlock significant growth and productivity opportunities for the combined company, while delivering substantial value to Xerox shareholders. The new Fuji Xerox will be better positioned to compete in today’s environment with truly global scale, increased presence in fast-growing markets, and innovation capabilities to effectively meet our customers’ rapidly-evolving demands. In addition, the combined company’s strong financial profile will enable investments that support continued market leadership, while also providing opportunities for increasing capital returns over time.”

The newly-announced deal had provoked criticism in recent weeks, with the fiercest coming from two of Xerox’s biggest shareholders, Carl Icahn and Darwin Deason, yet the transaction has been fully approved by the Boards of Directors of both companies.

“Today’s announcement follows a comprehensive review of our strategic and financial alternatives led by Xerox’s independent directors that began after the separation of Conduent in 2016,” explained the Chairman of the Board of Directors for Xerox, Robert J. Keegan. “Upon careful consideration of all alternatives available to the company, the Board of Directors concluded that this combination is clearly the best path to create value for our shareholders. An attractive, certain cash dividend, together with participation in the future success of the combined company, presents a compelling value equation for Xerox shareholders. We are excited to strengthen our longstanding relationship with Fujifilm as we enter the next phase of Xerox’s transformation journey.”

Both the Xerox and Fuji Xerox brands will be maintained within the respective operating regions, and the combined company will base headquarters in both Norwalk, Connecticut, and Minato, Tokyo.