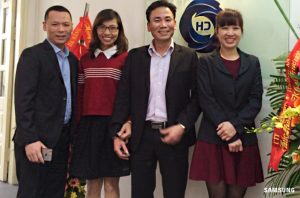 Vietnam’s Supreme Court has branches peppered across 66 of the country’s provinces, as Samsung Printing Solutions explains, but until recently court employees were struggling with temperamental office equipment. MFPs from “a variety” of OEMs were tried out, but as their operating language was usually English, as opposed to Vietnamese, they created “confusion and uncertainty”. In addition, they failed to provide sufficient workflow improvement, and were found to be slow and lacking in storage space.

Finally, one of Samsung’s Vietnamese partners, Minh Phat Technology, stepped into the fray and came up with a plan to solve the court’s printing problems “with a unique, customised solution.”

The company proposed to equip the Supreme Court’s 66 branches with 700 Samsung MFPs, offering “fast scanning and printing speeds”, in addition to 320GB storage and the option to switch to a Vietnamese-language UI.

This 700 MFP deal “marks the first time a Vietnamese judiciary body has invested in a uniform network of printers”.

Binh Minh CEO Dinh Viet Van explains, “Court employees used to struggle with their MFPs. In the past, you’d often find a cluster of people gathered around a printer, trying to figure out what the English-language menu options meant. That all changed after we introduced Samsung’s Vietnamese UI. The response has been overwhelmingly positive.”

However, Samsung’s adoption by the Vietnam Supreme Court is not the only printing industry news to emerge from the country in recent months. Since 2018 began, Vietnam has witnessed the establishment of a new Epson subsidiary, while Sharp plans to construct a solar power plant in the South-East Asian nation, and Clover’s Vietnamese off-shoot has recently been awarded a new ISO certification.