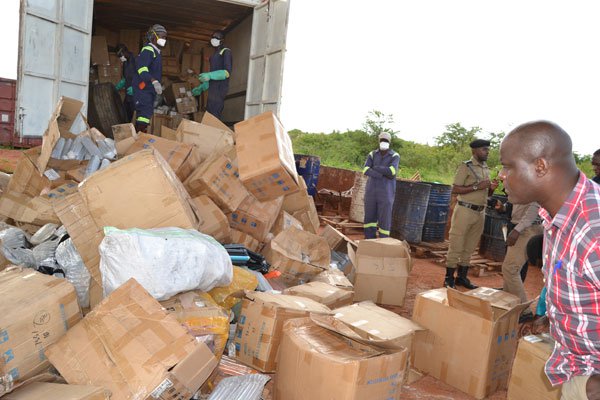 Part of the counterfeit toner and cartridges at the Nema-off-site-ground in Nakasongola District on Tuesday. PHOTO BY DAN WANDERA

The Daily Monitor reported that URSB destroyed five tonnes of counterfeit toner and cartridges which were seized between January 2019 and June 2019 by the URSB’s Intellectual Property Enforcement Team from several locations that were computer accessory stores. The destroyed goods had a value of Shs 7.2 billion ($1.95 million/ €1.75 million).

In total the Ugandan authorities say that 60 tonnes of counterfeit toner and HP cartridges were seized.

Talking to the Daily Monitor, the Head of Operations and Enforcement at the URBS, Alex Tumuhairwe said: “Majority of the counterfeit items were seized from particular locations at Bugolobi and Nasser road and some of the dealers have already been prosecuted and convicted under the intellectual property law. The products are a look alike and can only be identified by experts, therefore dealers take advantage of the unsuspecting customers to sell the counterfeit products.”

Tumuhairwe added that the court agreed to the destruction after successful prosecution of the suspects.

Peter Masinde, a consultant working with URBS, helping to track and identify the counterfeit goods, explained that the counterfeit products get repackaged inside the stores, before the dealers take them to the markets for sale.

Masinde added: “The business is lucrative and very sophisticated as many of the dealers are willing to part with large amounts of money to compromise the products. We call for commitment from all the concerned parties including the customers to help identify the unscrupulous dealers. The re-packaged products look genuine on the outside look and can only be detected by people with expert knowledge regarding the computer accessories.”