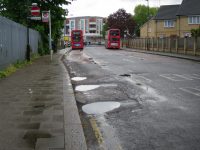 A British company is using plastic waste to resurface the country’s roads, and it is speculated it could provide the answer to the United Kingdom’s ‘pothole crisis.’

MacRebur, of Carlisle, in the North of England, have developed a bitumen substitute called MR6, which lab-tests show is 60 percent stronger and 10 times more durable than regular asphalt, reports the Daily Express. Now, Cumbria County Council has become the first local authority to use the material to resurface its roads.

The Council has called its £200,000 resurfacing of the busy A7 road a success, and has been in contact with the Government’s Department for Transport regarding the trial programme.

Stephen Hall, Assistant Director for Highways, Transport and Fleet at the County Council, said: “Our industry does have a significant carbon footprint. It’s incumbent upon us to seek new ways to mitigate this impact. A significant amount of recycled plastic went into the A7 resurfacing scheme, which has clear environmental benefits.”

“Cumbria is the first council in the country to trial this new road surface,” added the Cabinet Member for Highways and Transport, Keith Little. “Using this waste plastic material provides a more sustainable solution for road resurfacing. We will be using now it in a number of locations across Cumbria’s road network.”

As well as dealing with Britain’s increasing problem with plastic waste, the Express speculates that the method could also be the answer to the country’s growing pothole crisis, with the BBC reporting recently that 10 percent of roads under local authority control are in a state of disrepair.

The method is similar to one being deployed in India, which The Recycler reported on yesterday. Waste plastic is shredded into plastic pellets, which are the equivalent of half a million plastic bottles, or 800,000 single-use plastic carrier bags.

“MR6 is stronger and longer lasting than standard asphalt, plus it’s eco-friendly,” explained MacRebur’s founder, Toby McCartney. “With 40 million kilometres of roads around the world, MR6 could make a massive difference. All drivers know there are serious issues with crumbling and cracked roads and potholes.”

Currently, the UK produced 20 million tonnes of asphalt every year, with estimates suggesting 1.6 billion tonnes are used across the world annually.

MacRebur, which has attracted investment from Virgin boss Sir Richard Branson and Olympic gold medallist tennis player Sir Andy Murray, has previously used MR6 to lay a runway at Carlisle Airport, as well as a lorry park at Exelby Service Station on the A1(M).

Murray has since asked the company to resurface the roads near his hotel in Dunblane, Scotland. The former Wimbledon champion said: “I was interested in MacRebur because I am really impressed by their ambition to make a massive economic and environmental difference to road construction worldwide.”