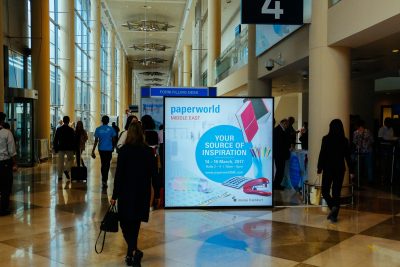 The Dubai-based trade show is looking ahead to its eighth year with excitement.

Paperworld Middle East, the region’s trade fair covering the paper, office supplies, and stationery industries, is gearing up for a big 2018, with over 300 exhibitors preparing to appear at the show and raise their business prospects later this year. The UAE-based sister show to this month’s event in Frankfurt has been running since 2011, and in its eighth year shows no signs of stopping.

Organisers Messe Frankfurt Middle East attribute its popularity to the strength of the globally-recognised Paperworld brand, whilst adding that Dubai, its strategic location, offers an “ideal gateway” for manufacturers to target regional markets as they emerge.

As a consequence, the show has seen a gradual increase in international buyers, rising from 4,420 in its first year to 6,443 – from 93 different countries – last year.

“The Middle East and Africa remains a major market for paper, stationery, and office supplies, with international manufacturers viewing the region as a key customer base, with high demand for printed media products,” explained Ahmed Pauwels, the CEO of Messe Frankfurt Middle East. “An added benefit for exhibitors at Paperworld Middle East is they can leverage its enviable advantage of being located in Dubai, the trade and commerce hub of the entire Middle East and Africa.”

New features at the show for 2018 include The Green Room, a new section dedicated to environmentally friendly products with ‘eco-credentials’, and a series of seminars discussing the latest trends and developments within the industry. This will join returning features such as the Playworld Pavilion, and “the region’s only gift wrapping competition”, Wrap Star.

Paperworld Middle East 2018 takes place in Dubai from the 27th of February to the 1st of March, at the Dubai International Convention and Exhibition Centre.