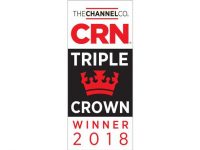 CRN has revealed that Marco has won its Triple Crown award, making it onto all three of the news organisation’s highest-ranking service provider lists.

This year, Marco has been featured on CRN’s Solution Provider 500 list, which ranks the largest solution providers in the US according to revenue.

Marco joins 45 other companies who also scooped the Triple Crown 2018.