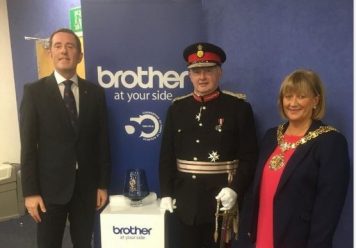 Phil Jones, MD of Brother UK, has revealed that the Lord-Lieutenant of Greater Manchester paid a visit to the OEM’s offices to present a prestigious award.

The Lord-Lieutenant presented Brother UK with the Queen’s Award for Enterprise Sustainable Development, in the presence of The Worshipful Civic Mayor of Tameside, and both current and former employees.

Jones wrote, “Bringing back past employees to join in the celebrations was wonderful, they included two former managing directors, (one eighty-nine years young) and twenty-four former employees with a combined service of 643 years (average 32 years). They were hosted by 20 colleagues who themselves have long service, accumulating 542 years of service thus far (average 27 years).

“It was so lovely to see the joy in the room as old colleagues reunited and memories re-ignited about times gone by, then contrasted with an office tour to see how we continue to transform. At times I felt emotional recalling stories of people in the room who had helped a young fax salesman further his career to eventually be made MD.”

He continued, “I owe them so much, so it was lovely to have them back with us today and acknowledge the part they all played, regardless of role/function. With a growing community of young people now in our business too, it was also a perfect platform to connect the past and future. Super stuff.”