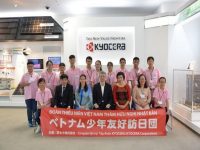 Children from Hanoi, Hung Yen, and Hai Phong enjoyed a sample of everyday life and customs in Japan, The Siasat Daily reports, “in the hope that they would grow up to become international citizens who will contribute to a more harmonious global society.”

The initiative aimed to give the children firsthand experience of different cultures, that they may act as a useful link in Vietnam-Japan relations, as well as leading “prosperous and fruitful lives as leaders in various fields in the future.”

On the Kyocera leg of the tour, which also took in cultural attractions in Kyoto, Shiga, and Osaka, the children took a tour of the OEMs Shiga Gamo plant, and learnt about the Japanese manufacturing idea of monozukuri.

Kyocera also hosted a reception for the children at its headquarters, before the guests got a chance to experience everyday life in the country during a three-day homestay with Kyocera’s employees.

The programme was dreamt up by Kazuo Inamori, Kyocera’s founder and Chairman Emeritus, who was “deeply moved by cultural interaction” during his first visit to the United States on a business trip.

Kyocera has been inviting Japanese children on foreign tours since 1976, with Inamori hoping that direct interaction with foreign cultures would allow children to develop broad perspectives and bold dreams for the future.

Tours for foreign children to Japan have been undertaken since 1978, with more than a thousand young people have participated. As well as Vietnam, tour parties have also come from the USA and China, where Kyocera also has large-scale manufacturing bases.