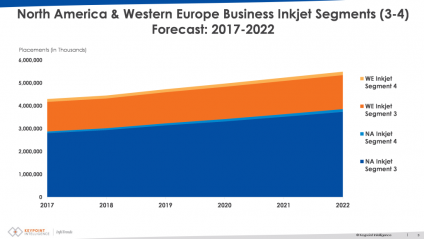 A recent Keypoint Intelligence/InfoTrends blog reveals the expectation of “continued growth” in both the A4 Colour Laser and Business Inkjet sectors through 2022 in Western Europe and North America.

As the blog reveals, Keypoint has unveiled its predictions in its “recently published SF Printer and MFP Hardware Forecasts for both regions.”

In North America, where “SF laser printers represented 46 percent of total shipments in 2017”, there is expected to be a decline of 42 percent in comparison with MF shipments, “which will grow from 52 percent to 58 percent by 2022.”

Meanwhile, in Western Europe, “MF shipments will grow from 55 percent to 59 percent of total shipments during the same period.”

According to Keypoint, “While the overall market for both regions will remain relatively flat to a slight decline the shift from SF to MF devices and from monochrome to colour will continue to impact the overall office equipment market.” The predominant area of growth opportunity lies in the office colour laser A4 segments, in both North America and Western Europe.

The Keypoint/InfoTrends forecast also indicates “growth in Business Inkjet Segments 3 and 4 through the same period”, with the former “expected to grow at 5.9 percent CAGR in North America and 2.8 percent CAGR in Western Europe.” The main contributor to unit growth will be A4 MFPs, thanks to “new models that offer longer life consumables and feature-rich product offerings.”

These new inkjet devices will be particularly attractive to SMBs as they offer “standard wireless connectivity, high yield consumables and in some cases, comparable cost per page to laser.”

Meanwhile Inkjet Segment 4 is forecast to grow at 10.8 percent CAGR in North America and 3.7 percent CAGR by 2022 in Western Europe during the same period, due to “a wider acceptance of page-wide technology and new robust high-speed colour inkjet devices entering this market segment.”