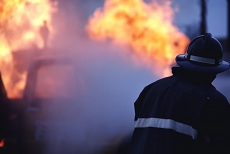 Production was stopped for a day following the flash fire.

The conflagration happened at the company’s premises in Hebron, Kentucky, after a spark from a piece of metal caused a flash fire, as well as a “big booming noise”, according to Fox19.

The flames were contained by the site’s back-up safety systems, although neighbours were said to be “startled.”

The warehouse itself suffered minimal damage.