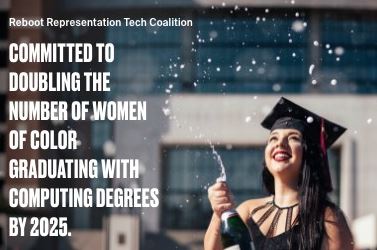 In a new blog, the OEM has been citing its dedication to advancing the place of women in colour in the technology world.

With new research published by Pivotal Ventures revealing that “only 5 percent of company’s philanthropy goes toward gender diversity in tech and even less (0.1 percent) goes toward women of colour”, Dell has been voicing its commitment to the cause.

The company has joined forces with Pivotal Ventures to launch a new initiative entitled Reboot Representation Tech Coalition. This partnership between the two organisations “seeks to align philanthropic donations and to increase funding with the ultimate goal of doubling the number of underrepresented women of colour graduating with computing degrees by 2025.”

Dell is a founding member of this initiative, along with other global names such as Microsoft and Adobe.

So far, 12 companies have signed up and “committed more than $12 million (€10.2 million) to this goal, which represents a 30x increase in funding.”

“Technology continues to transform our world in unprecedented ways. Now more than ever, it’s imperative that we have diverse perspectives helping to shape our collective future, and that means as an industry we have a responsibility to address skills gaps and break down barriers to participation,” says Dell.